I haven't done much modelling lately but this week I've made a few changes to the 'Three Bridges' end of 'Underhill'. I've added some more rock outcrops above the nursery to try to disguise the slightly odd and over large wall which hides the fiddle yard area; I think it is an improvement. I had never been very happy with the colour of the rock cutting above and behind the cheese factory and so this evening I repainted it a more sandstone sort of colour like the hill behind St Ruth. 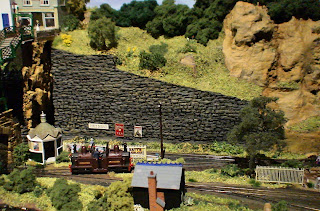 One of the improvements made over the hastily cobbled together scenery I did for the Porthmadog exhibition    is the addition of some rock mouldings above the tunnel mouth holding up the end of Alma Street. 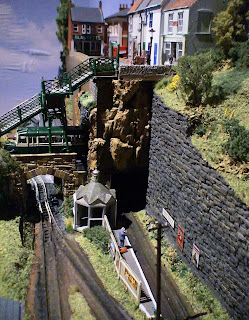 The picture above shows the wrinkly sky to the left. I need to scrape that off and do it properly as it spoils the illusion at the moment. I used PVA to stick it on and it was a mistake, I've always used 3M spray mount before which isn't perfect but doesn't make a mess like that. 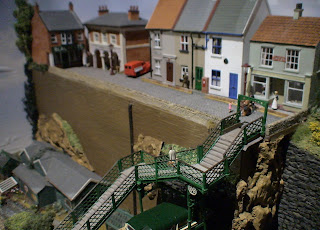 Alma Street has had some improvements too, the pavement now has its low raised wall and the houses have door steps. I've still some bits to do like drains and some flower pots etc. The low wall along the front edge has always been destined to have a metal topping to it.

The other thing I've done this evening is fit a new chassis to Lady Stoner. It has previously had a KATO 11-106 chassis as prescribed by Chris Ward and this is fine on the level and not hauling very much. I noticed that Bandai make a dimensionally similar chassis which has all eight wheels driven rather than the four on the KATO. I removed the KATO (and destroyed it in the process,doh!) and slotted in the new unit which is slightly smaller, width wise; it ran very smoothly and was happy to haul four small bogie coaches up the hill to St Ruth. It just managed five but I think four is fine. The Bandai came all the way from Plaza in Japan who give excellent service. 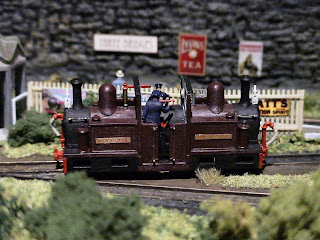 Well I haven't had time to update the blog for a while but I've had a few hours modelling which I'll list in a while but first a bit of history. When I sold the very first Isle of Stoner layout on eBay I put a video of it up on youtube so that prospective buyers could see what they would get.

I made a video of my previous layout, The Afon Garreg Railway which was a Welsh quarry line. I've got that on DVD so I'll have a go at uploading that to youtube as it's a quite nice memoir.

Some of the rolling stock is still on the railway as are some of the buildings.

Apart from that I've done a few bits and pieces by way of not getting on with sorting out Underhill for NGN which is looming in early March. 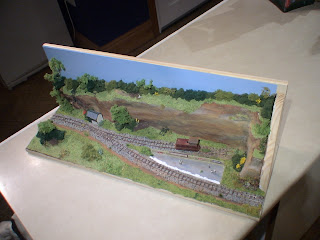 This is the little diorama I built to take pictures of rolling stock on, I'm pretty happy with it on the whole. The track could do with a bit of weathering and the edges of the wood need some black paint to tidy them up.

Sitting in the siding is my Narrow Planet Baguely Drewry diesel which is now finished, still needs varnishing and some more weight inside. Nice kit. 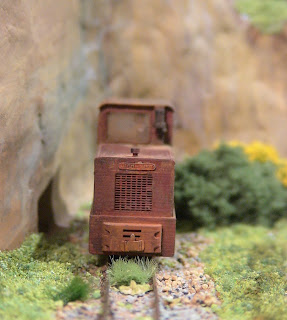 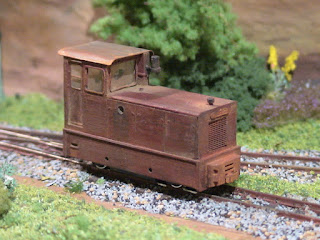 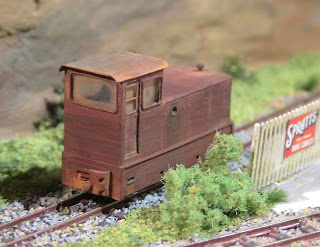 At the exhibition in Porthmadog, Neil Rushby gave me a couple of the resin castings for the Fowler passenger trolley which have been lurking in my tool box since then. They didn't have the roof castings so I didn't want to make lidless versions of the 4 wheeler so it occurred to me to make a bogie version. So far I've sawed the castings up a bit and glued them together adding some styrene strip to make a sole bar and so on. The ends are Langley L&B seat etches, the bogies are PD WD one I think. 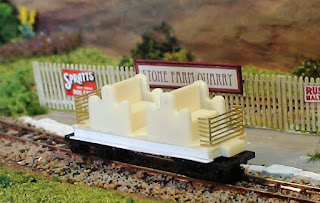 I may add a roof from styrene and whatever else comes to hand.

Father Christmas brought me a nice Scenecraft warehouse which I have started 'Stonerising'. The original plan was to use it on the, as yet un-built, Port Lucy board but I like it and want to use it now so I've found a home for it at St Ruth. The only problem with it is that the loading dock is too high for NG wagons but I don't really want to take the saw to the building... I can't think of a better way to sort it out though. I've added various bits and bobs and the whole thing needs a slap of paint. 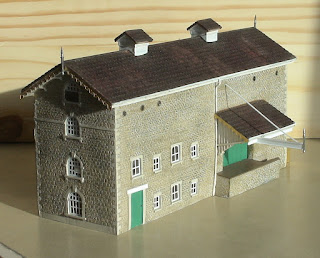 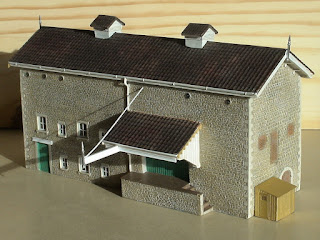 Lord Stoner and all the happy inhabitants of the fairest isle wish our readers a very happy new year.

Since the exhibition I haven't had a lot of time for modelling but I have done a few bibs and bobs.

I've built and painted the new Narrow Planet loco which is cracking and although the prototype is a bit modern... I don't care. I've painted it in scab red and added a large amount of rust and filth and it looks great. 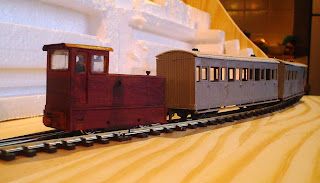 Not the best picture

I've also embarked upon a series of rolling stock upgrades starting with replacements for my VoR cut and shuts which I did a few years ago. The new Parkside Dundas DM10a kit with newly tooled sides and a moulded roof are a huge improvement and were what caused me to start with these. I've cut one compartment from the coach and the composite is also missing one compartment. I've added door handles from the Langley etch from the L&B coach which I bought for the slatted seats which make very nice coal rails on locos. 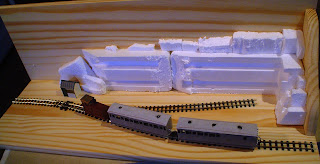 Having said I haven't done much modelling... I've also started a small diorama for taking pictures of rolling stock on. A couple of cheapo shelves from B&Q and some off cuts of track. I've stuck some polystyrene on as the basic scenery formation but this is as far as I've got. 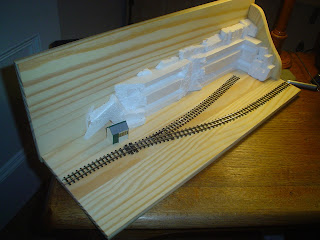 The little ground frame hut is the Bachmann scene craft green house which I got for Christmas. I've painted over the roof in grey and it has the look of the Corris signal box about it.
2 comments: