I finally got some time to do a bit of modelling today and so I painted the new Kerr Stuart diesel. I had spray painted it with primer which showed up a couple of bits of soldering which needed tidying up which I did yesterday with a quick bit of filing. I re sprayed the primer yesterday also which gave a better coverage than my first attempt. 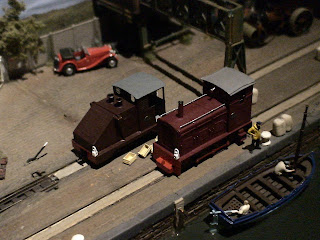 This is both the new diesels sitting together on the wharf. They both need some weathering but both run very nicely which is pleasing. A new loco in means another has to go, sniff, snivel. So which loco is up for sale? After some soul searching I decided that I never use my Stenning Corris loco so onto eBay she goes. Hopefully someone will like the look of it, it has a very smooth Fleischmann chassis and is a pretty nice loco. 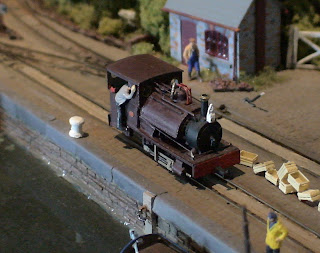 I had a bit of a fiddle with the GEM Dennis cross breed chassis and it jerked along for a while before ripping one of the cylinders off. Back to the drawing board. I won't be beaten... probably.

I had a trip round Llechwedd slate caverns today which was OK. My daughter loves it and we can't go often enough as far as she is concerned. I had the chance to check out the slate wagons 'preserved' on the site. Mostly they are not very remarkable but they do have the rotting remains of the only existing LNWR 2ft gauge coal wagon. There is also a short wheel base gunpowder wagon which must have been fiddled with at some point as it has a GWR slate wagon chassis. 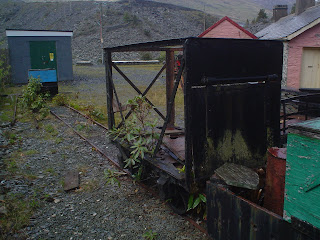 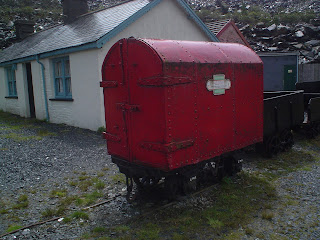 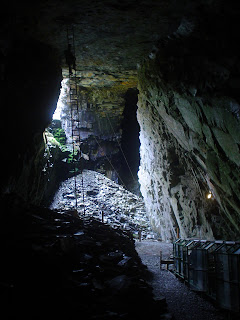 I haven't had much time to do any modelling this week, too busy with the real thing but I did get the painting on the new diesel more or less finished. The cab roof needs another coat and then the whole ting needs a dose of weathering; I'm not going to go mad but it needs enough to look used. 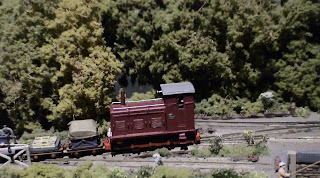 I also noticed when I took the picture that I haven't fitted any pipes out of the sanders yet so the sand will just go on the ballast. It runs very well and so my decision not to mess with the chassis to add the jackshaft was a good one.

Next, I'm hoping to get the other 08 chassis under Blower working properly with its new cylinders and rods. Fiddly but worth the bother I hope. 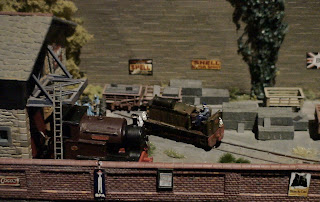 I've had Arnold Lane Wharf out to play with so here a couple of not very well lit/focused pics.

A man walks into a shop

Sat at my desk yesterday minding my own business when one of my lovely staff came in clutching a dirty old box and said
'A man came in and said did we want these?'
What was in the box? Amongst some other old crap was a part built GEM/FR Prince kit and a few bits of a coach and a slate wagon plus a length of GEM 12mm NG track. 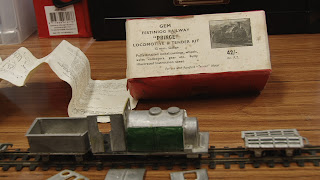 The loco kit has been half built to a good standard and painting has been started. There are the rest of the parts to finish the loco and slate wagon so I shall complete it and it can go in the shop window as a heritage item.

I'm a bad person, I know I am. I've had a couple of days off and Mrs Lady Stoner is away so I've been playing trains in the living room and not had to clear up my mess.

Having decided to finish something before starting another I started something else.. doh. While I was enjoying making my new big diesel from Mr Ts excellent kit for a Drewry I thought maybe I should grasp the nettle and keep the soldering iron out and have a go at the A1 models Kerr Stuart which has been lurking in the drawer for a while. I have to say that both have come out pretty well so far. The KS needs a bit of cleaning up but the Drewry looks fab. 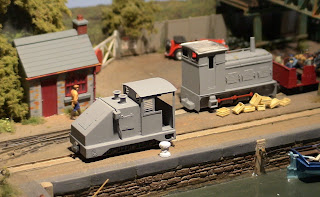 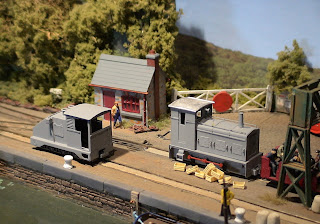 I've also been brave and had a go with the spray can of primer I bought a while ago. I think I've got the hang of it now; less is more. Flushed with success on the diesels I've also sprayed Beddgelert and the NWNG coach. The loco looks good however the primer shows up a couple of places where it needs a spot more filler here and there. 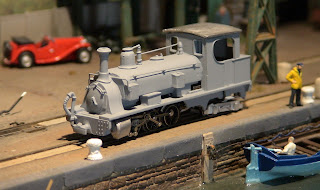 So I had somewhere to test the new locos I dusted off Arnold Lane Wharf which is where the above pics were taken. I've had some fun playing trains too, I'd forgotten what fun it is shunting little trains back and forwards.

One other thing I've been doing is once again having a go at sorting out Blower, my GEM Dennis bash. It is one of those locos which has never been quite right, it has been the subject of cat attention twice which mashed and bent it before it was even painted and then again after I'd sorted it out and painted it... Anyway, then I fitted a GF 08 chassis with a pony truck at the rear making it an 0-6-2 but it never looker right without cylinders on the outside so I've started to attempt to fit a set of Mr Ts including the frame casting from one of his diesel kits. Turning out to be bloody fiddly but the look is improved already and I shall persist. 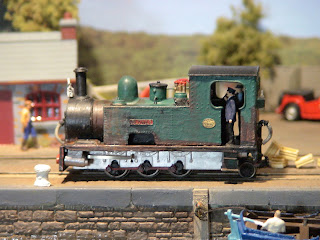 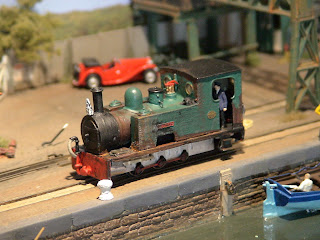 Continuing my pledge to get shot of a loco everytime I build a new one, I've put my Liliput 4 wheel diesel and my Eggerbahn railcar on evilbay. I've also listed my daughters Egger Western loco and coaches as she has decided that having a 009 layout is not a cool thing for a teenage girl... fair enough. She was very nice about it, not wanting to hurt my feelings but as soon as I mentioned that there might be a few quid in it for her she perked up. 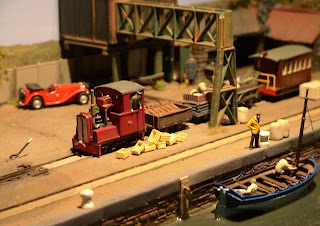 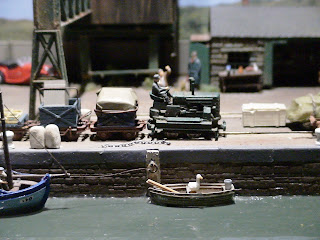 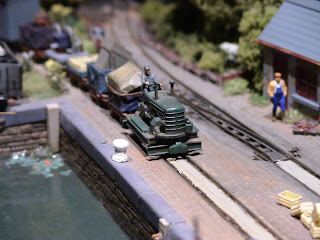 Some evidence of playing trains.
No comments:

Some pictures of the Pickering brake coach on which I made some progress yesterday. It seems that the NWNGR ones didn't arrive until 1907 so as a companion for Beddgelert it is useless as Beddgelert was scrapped in 1906... ahem, sold to the IoSR I mean. Nice coach anyway and it sits well with my VoR bashes and so will be about right to go with the PECO L&B stock. 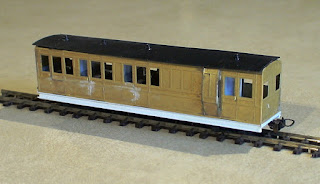 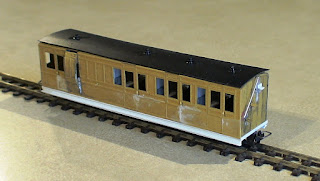 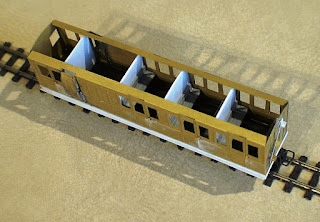 The lid isn't stuck on yet as the inside needs paint and people and glazing first.

I've spent all this morning working on the RT models Drewry DM and after a bit of a false start on the top handrails, I'm happy with the look of it. I made a complete mess of the handrails so ripped them all off and filled in the holes. Starting again I've done something which looks ok but which is not quite prototypical but as this is one made for the IoSR its fine. 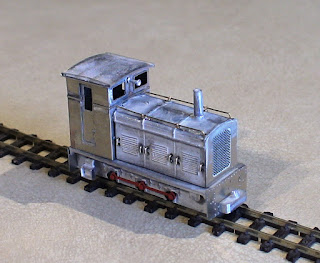 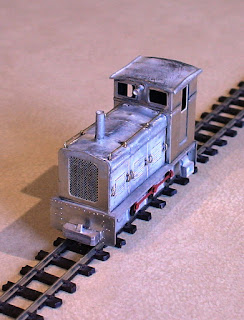 The chassis runs very nicely so I'm going to leave the jackshaft modification in the box and may revisit it another time. 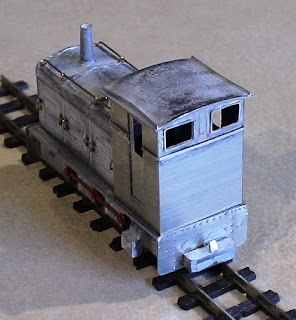 There are a few details left to add but it is fundamentally ready for the spoiling by paint phase. I think I'll add this and the pickering to the list of things to be spray painted, at least with primer.

I've got a few other things which need the attention of the paint brush so I might have a crack at those tonight. Namely the PQR coach and the Rushby Resin bodge.

Oh no... another loco build

I've had a frantic weekend at work chasing many steam trains around 40 miles of railway with a camera, anyhow, during this time the Porthmadog Model Railway exhibition was on which I attended very briefly. It was nice to see some quality 009 there and a good variety of other stuff too. One of the traders had a Graham Farish 08 for sale which I haggled him down to £60: bargain. I've had a need for a couple of these for a while as I've had a RT models Peckett and also one of his big diesels. I decided that the diesel would be easier and I could make it more straightforwardly as the Peckett will need shortening to cope with the IoSRs curves.

I've put together most of the whitemetal parts and the brass buffer beams, including pushing the rivets through. It has gone together well and I think it will look very nice. I'm off again tomorrow so hopefully I will be able to solder the cab together and do all the handrails which are such a prominent feature.

The other thing I did today was to progress the PD NWNGR Pickering brake coach a bit further. I've added an interior from styrene and some left over VoR coach seats. I cut each seat into unequal parts of 2 and 3 planks then glued them into an L shaped seat which I then glued onto the compartment divides, they look quite good. I don't really know how the layout in the Guards compartment worked. From what I can see there was a partition between the end section with the windows and the van part so I've added one but I'm not clear where the doors to the van area were. More research needed.
No comments: