Over the hill and round the bend

Having had a mad week with another in prospect, I had a couple of days off and managed to get some modelling time in which involved more plaster bandage and a new road over bridge. 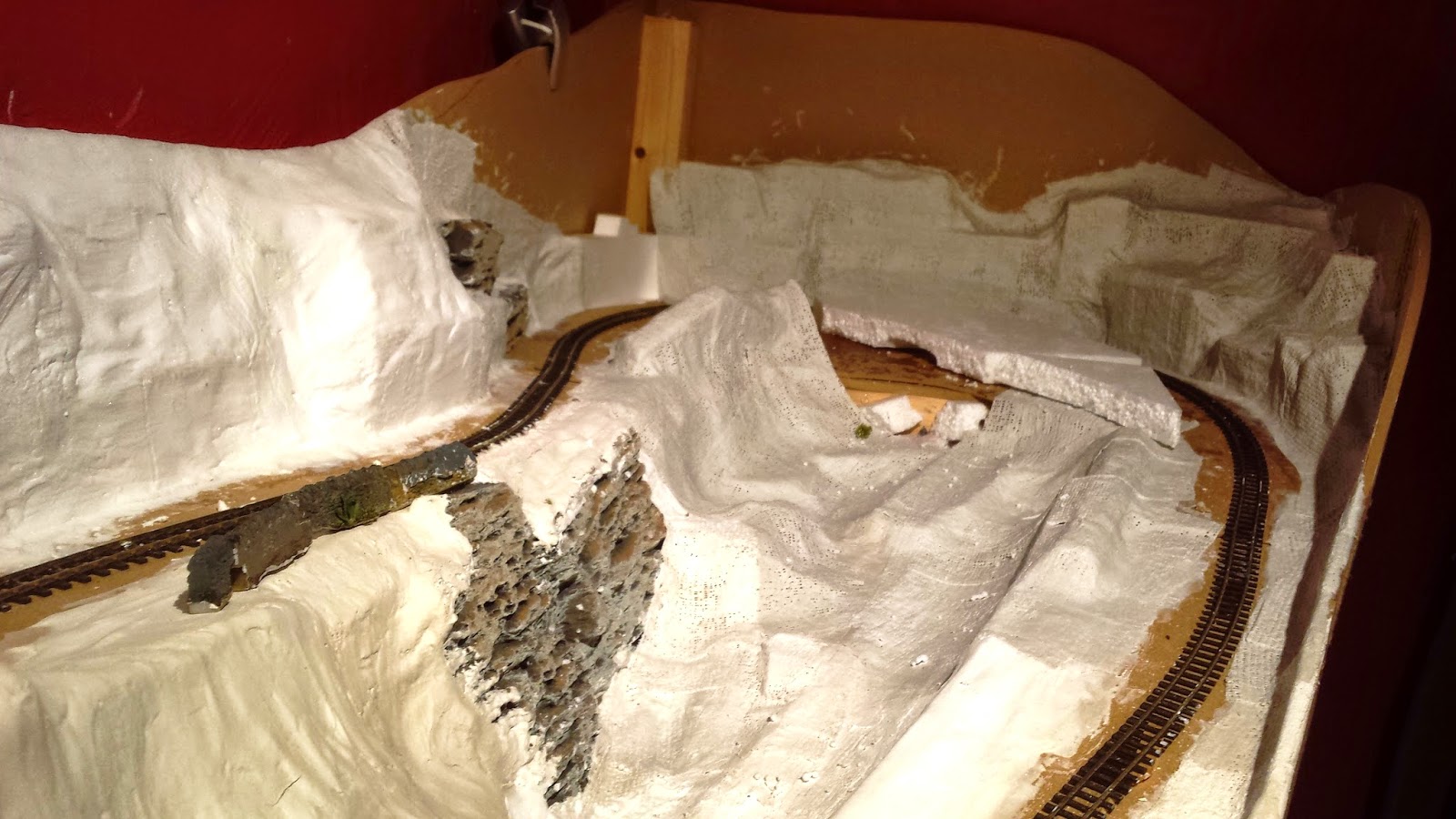 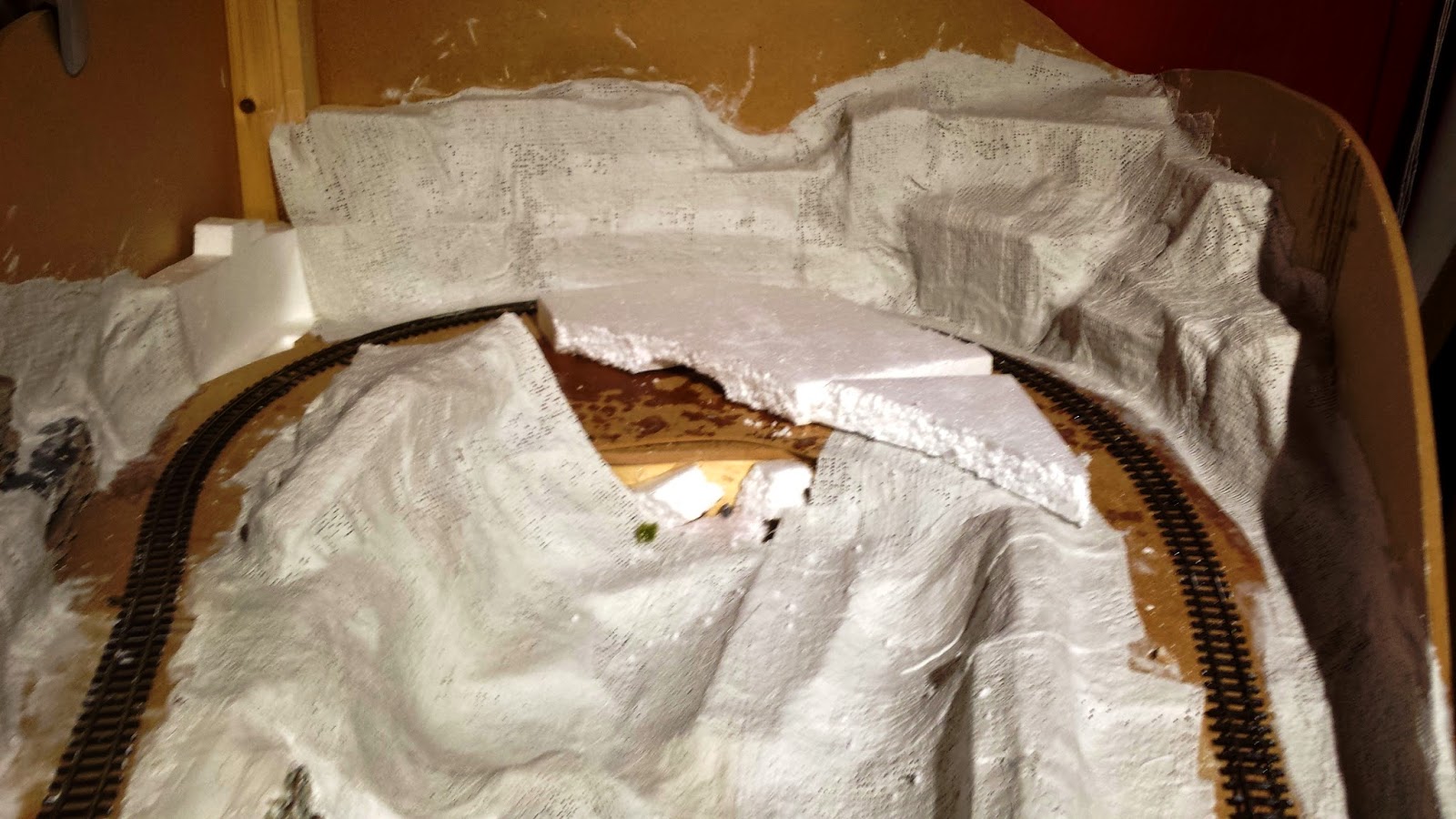 These two picture show how I left things on Sunday evening, starting to get a better idea of the lay of the land. 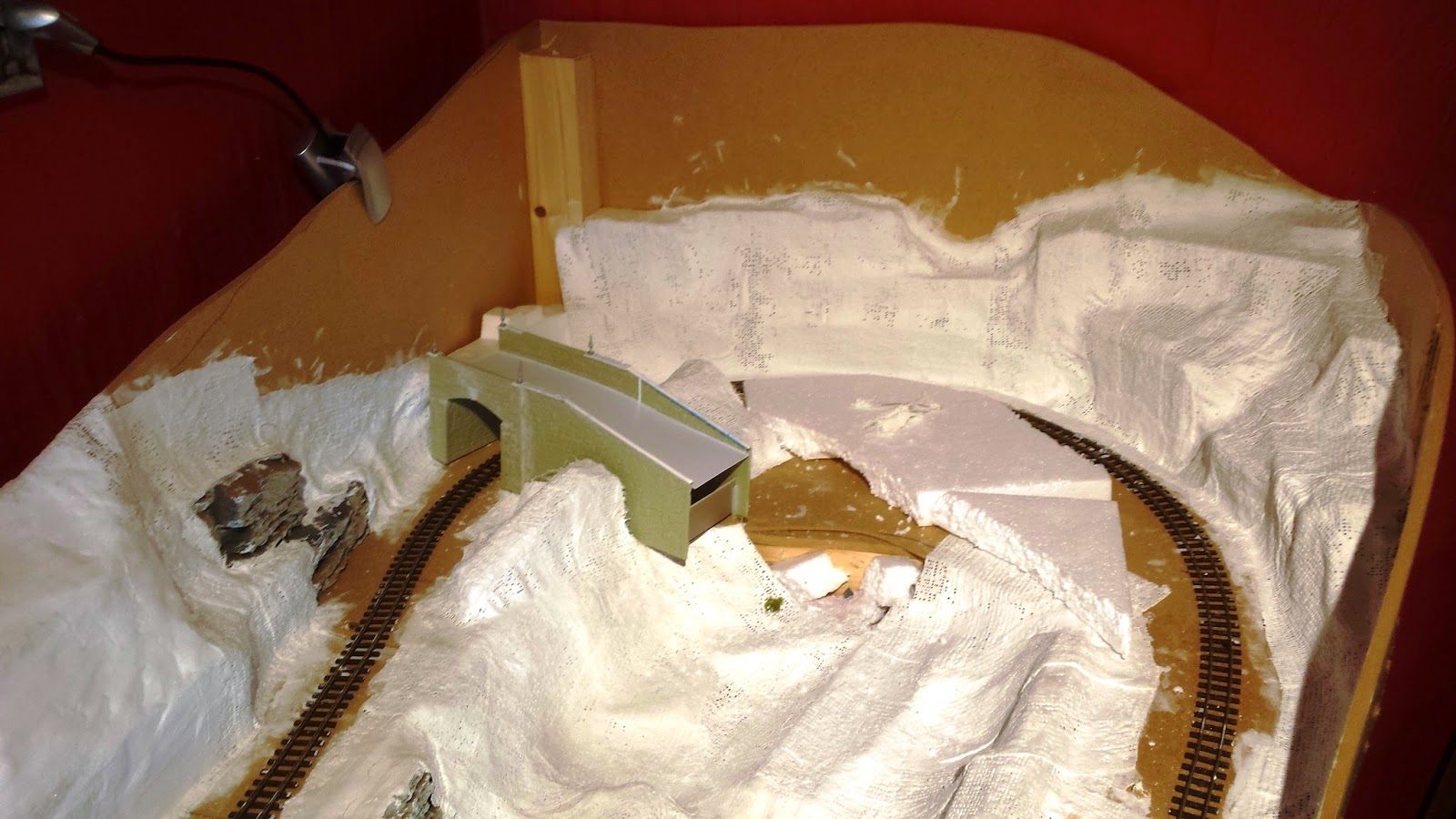 On Sunday evening I constructed the bridge using mostly bits of Wills styrene sheet. The bridge itself is similar to the one on Underhill (which I originally made for this layout to go where the new footbridge is!) The idea of it being where it is is to provide a scenic break between the two chords of the horse shoe bend. 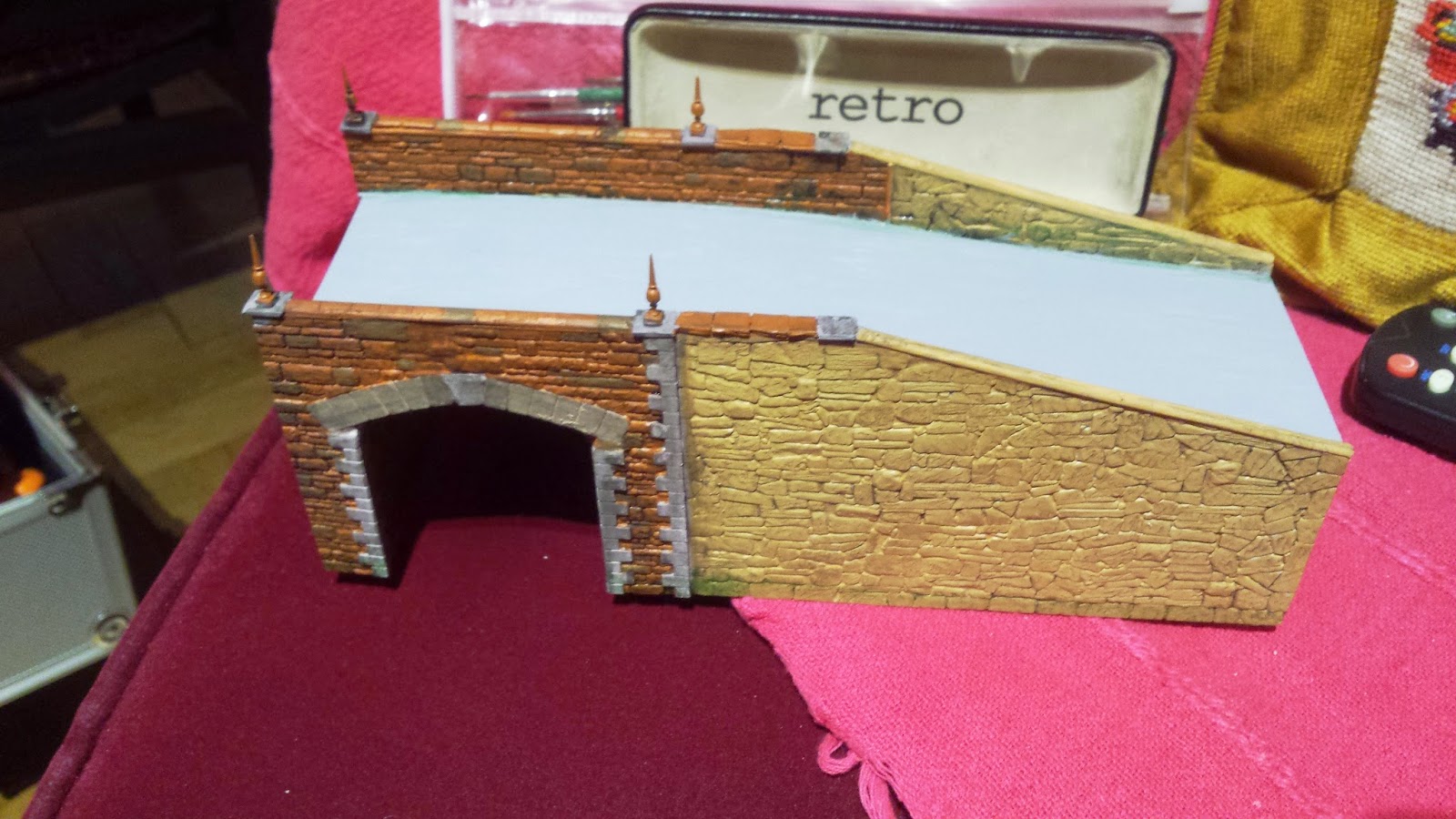 This is the finished article after painting. I would have gone for a more detailed job on the stonework but as it will always be at the far end and the back of the layout this will do.

Having made the bridge straight I've had to slightly alter where it sits as the original idea was for it to be slightly on the curve. I tested it place and the L&B PECO coaches were too tight a fit for comfort. To rectify this I got out a tennon saw and sliced through the new scenery nearer the straight and all is well. 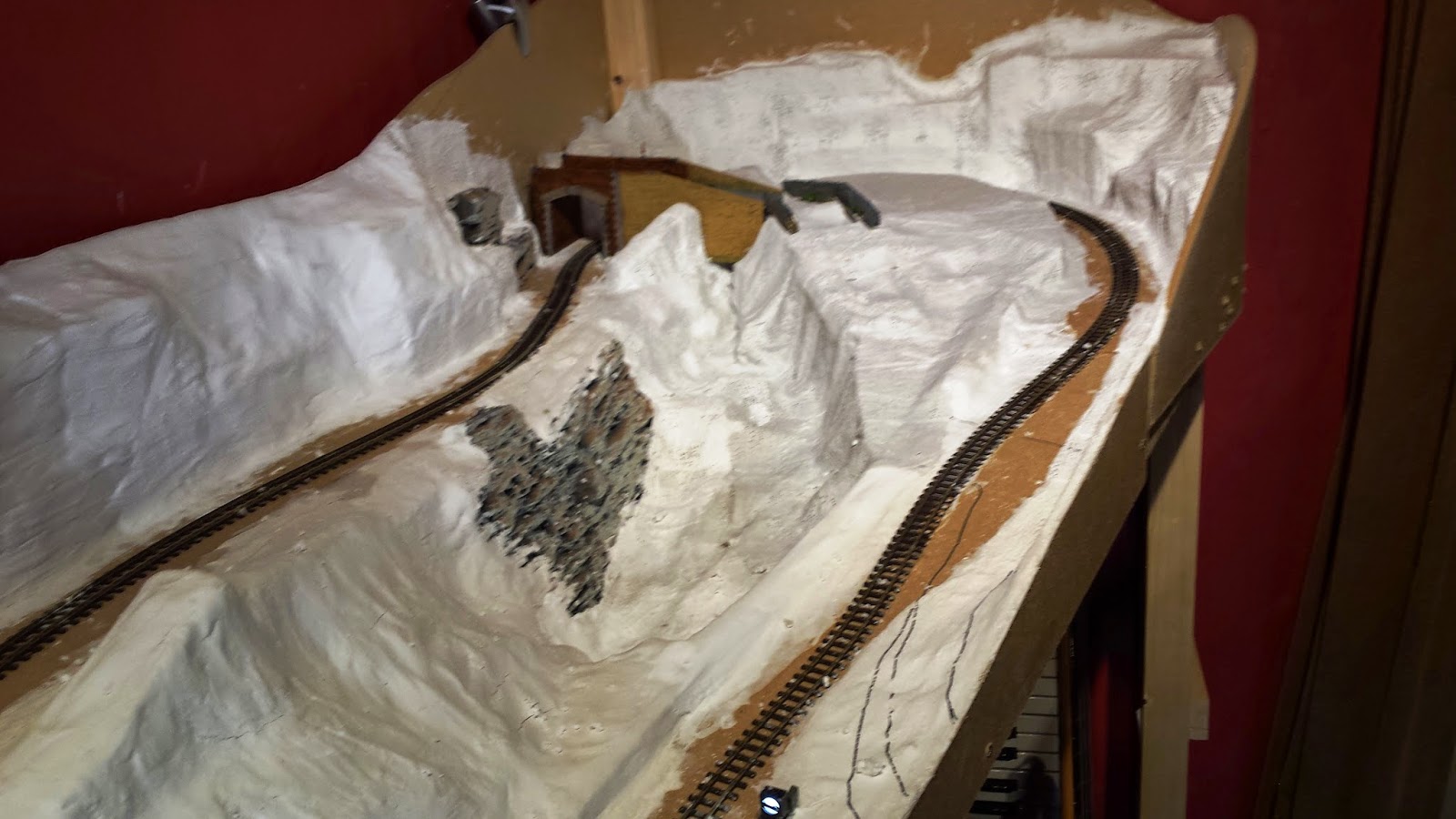 With the bridge properly sited I then built up the scenery leading up to it to make room for the road. I wanted it to dip down below railway level and then come up and over a level crossing on the front edge but it ended up with just a slope down to the crossing. The road will have to run alongside the railway for a short while but I think it will be a characterful little scene. I might even have to pose a steam roller with a tiny Sid James waving his fist there.

I've continued with the scenery work this week to the point where I ran out of plaster bandage and filler. Panic not, both are replenished. I've moved on down the valley towards 'the horseshoe' end and I'm pretty happy with the results, so far. 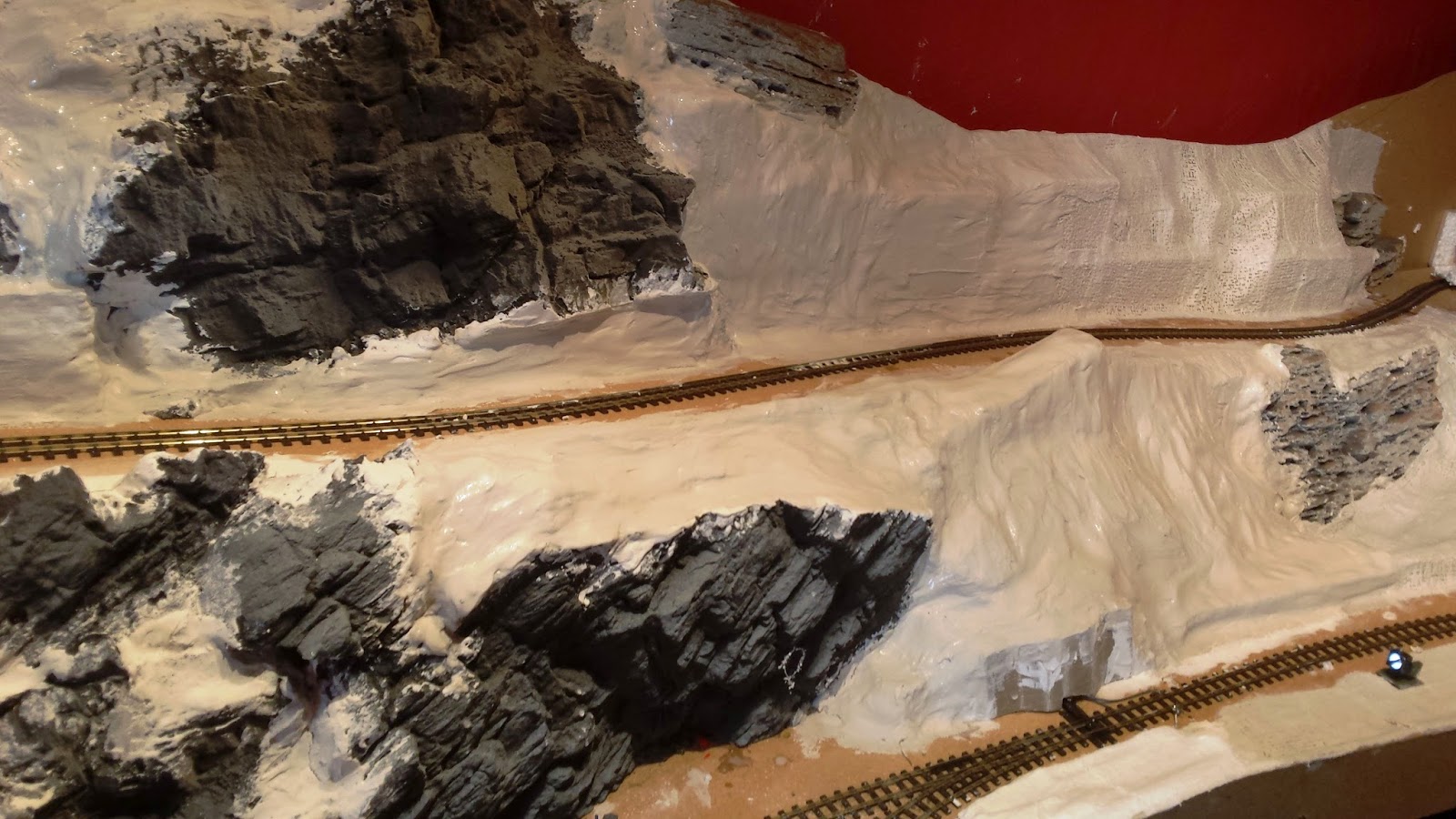 I've used some leftover plastic rock here and there. The plaster bandage forms the basic landscape over the polystyrene and bits of old stuff, then once it's set I layer some filler over it and then smooth it out with a very wet brush. It takes a while to set hard and is prone to crack a bit. If it does I just fill the cracks with another layer of filler. I try to make the landscape as though the rock and earth has been eroded by nature, principally water. 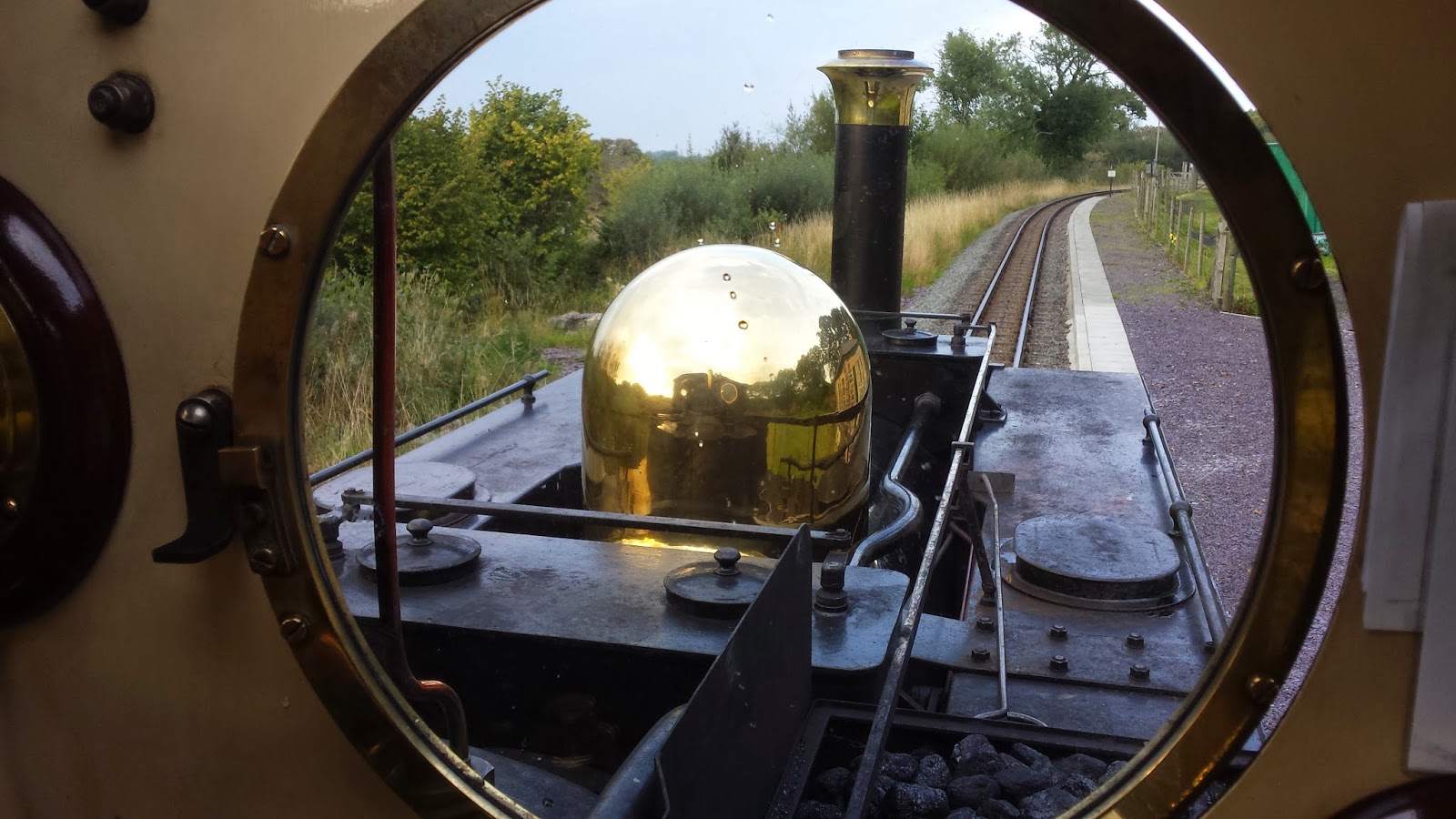 Tryfan Junction Station from the footplate of Lyd

I've had a very busy weekend in the 'real' world so haven't had much chance to progress, however I have built and painted a water tower for the station. 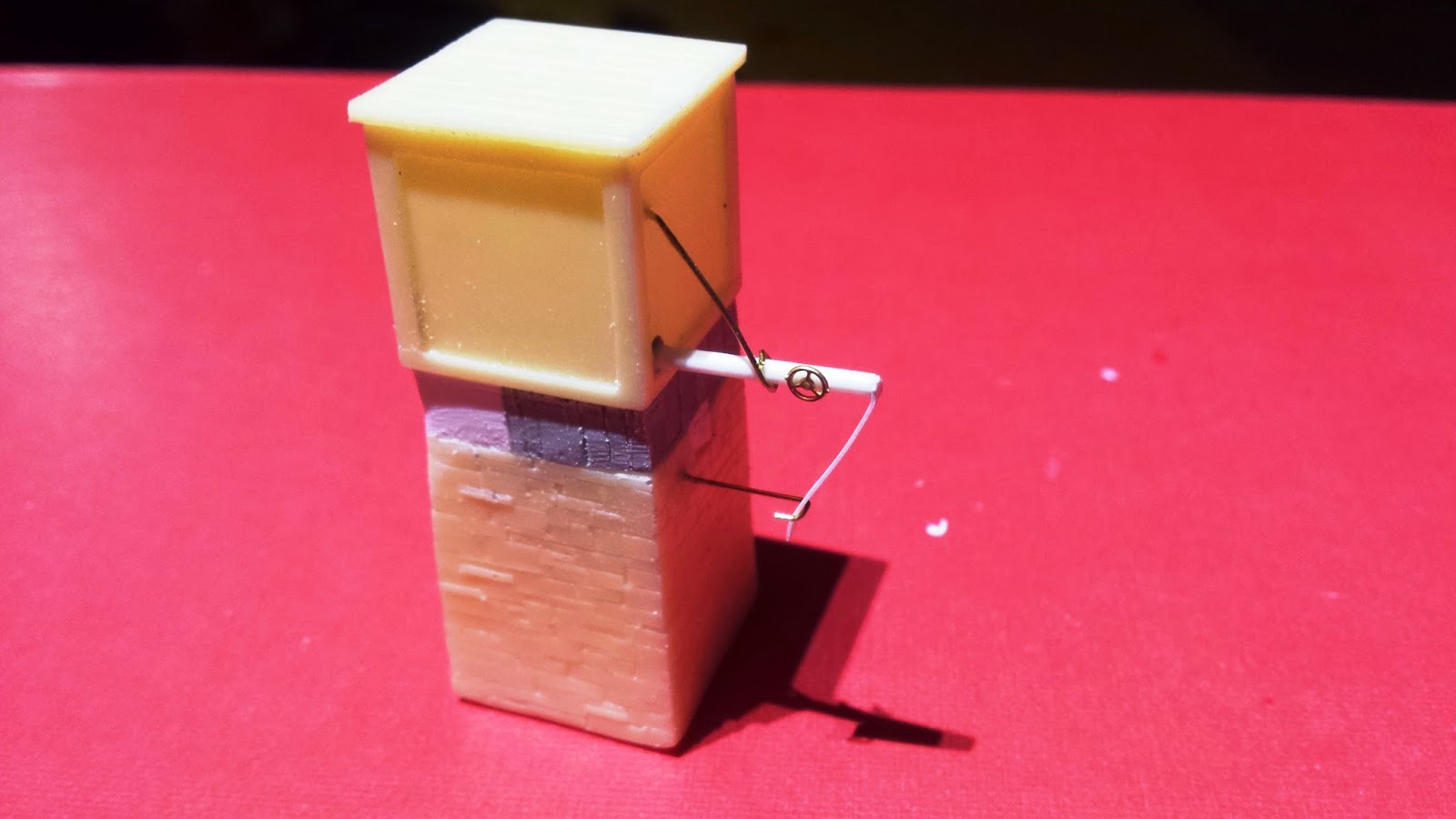 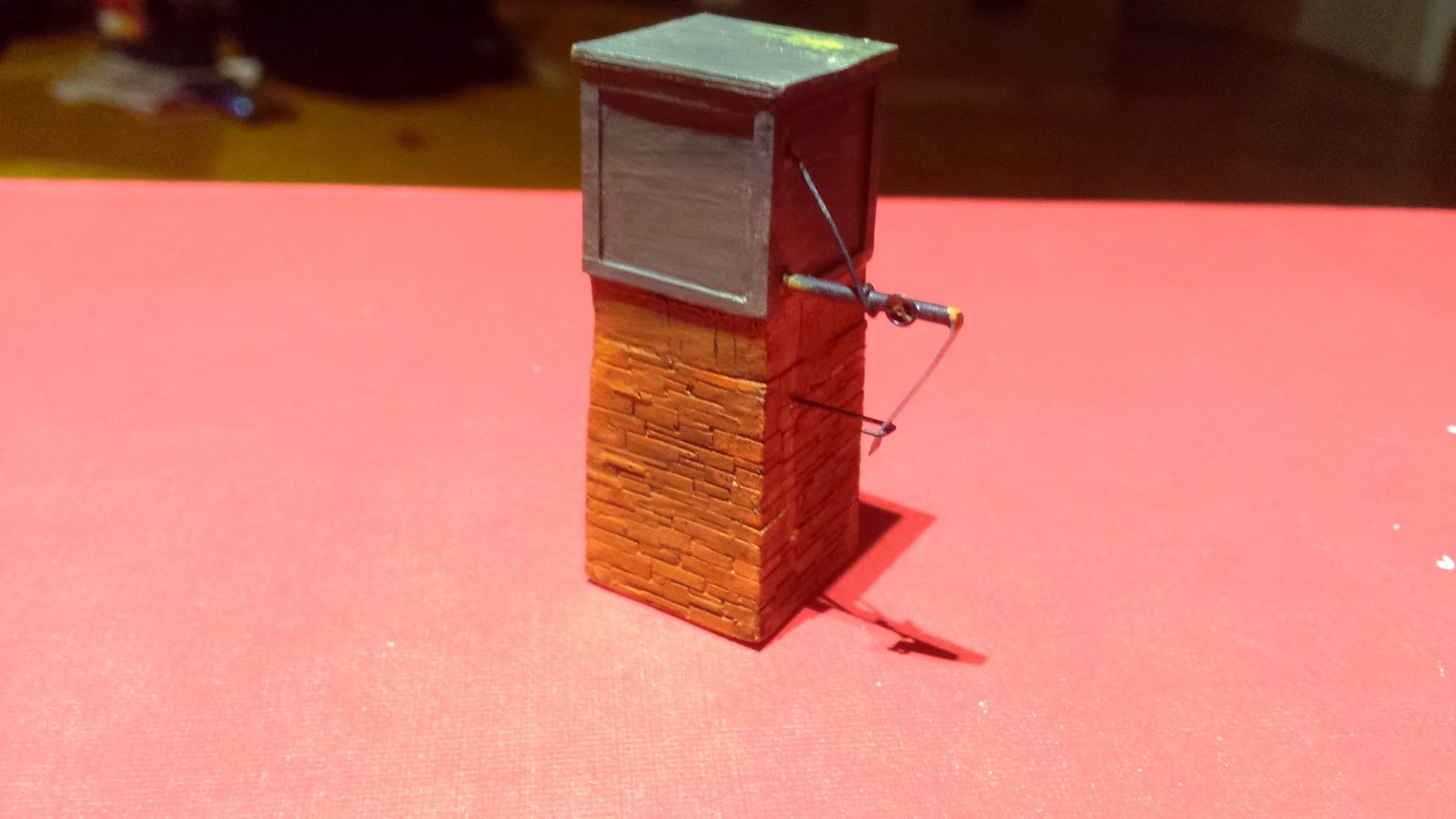 The basis of the water tower is a Unit Models resin casting but it isn't tall enough as nature intended so I've added an extra layer to add height. This is originally a Talyllyn job with a wooden trough to fill the loco but that is no good for me so I've made a pipe with a valve and a more traditional fabric 'bag'. 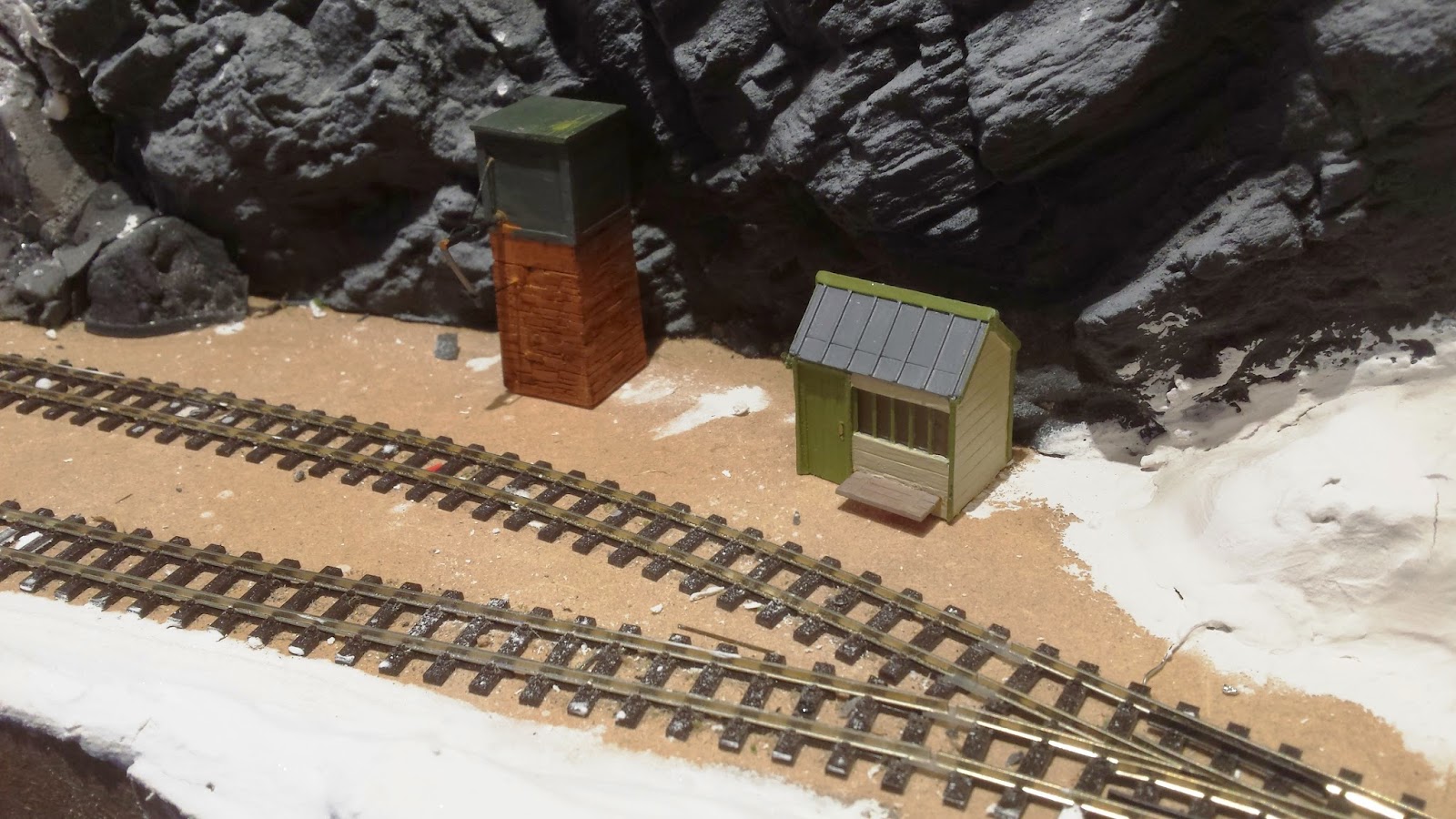 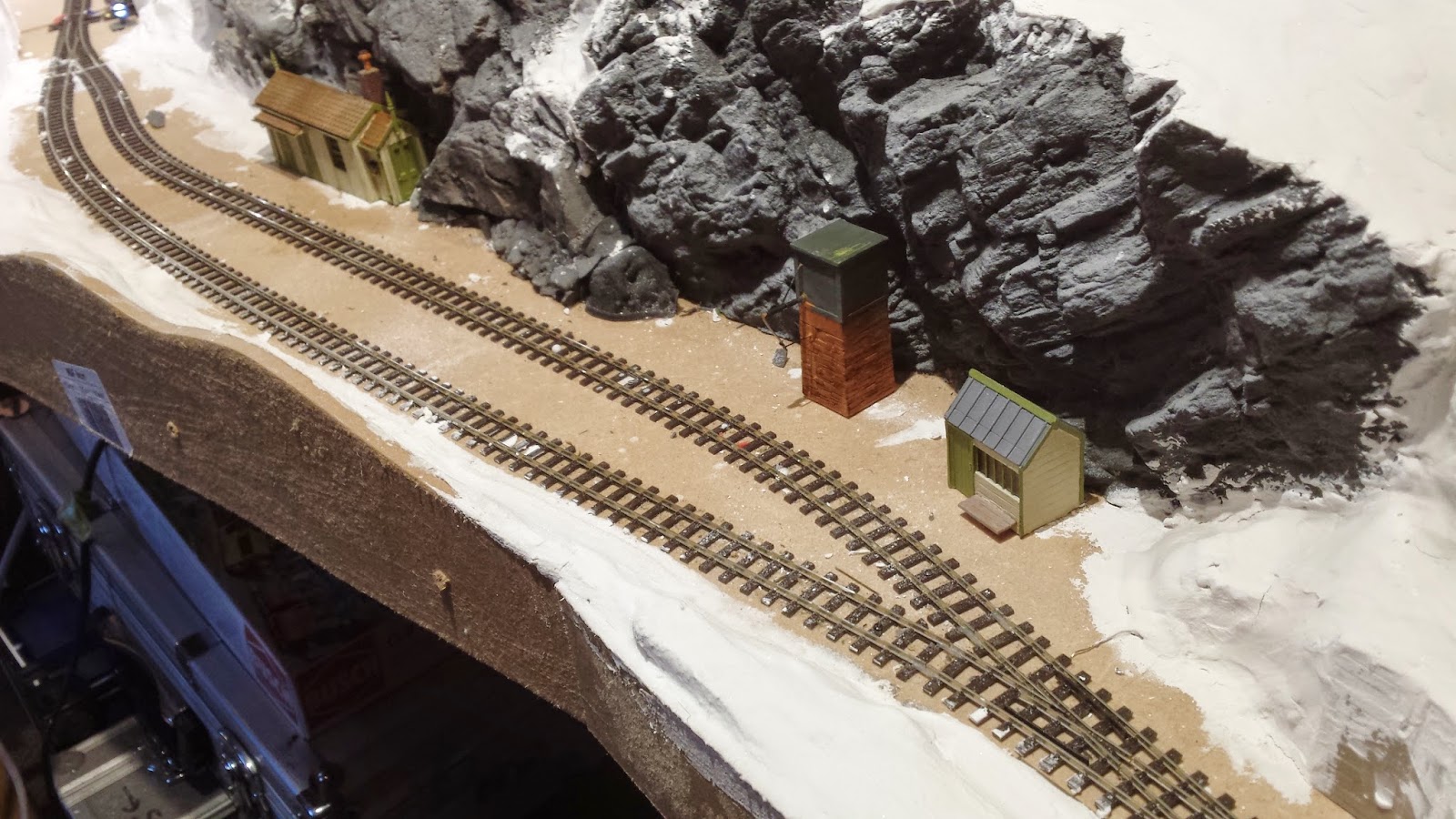 It ends up on the wrong side of the loop so I will need to add a facility on the 'up' line. It will need a pump to get the water to it which is an excuse for some sort of waterwheel and pump arrangement.

I finally had a day off and found a few hours to make some progress on the layout. As I left it last week I'd glued rocks and some wall mouldings in place. 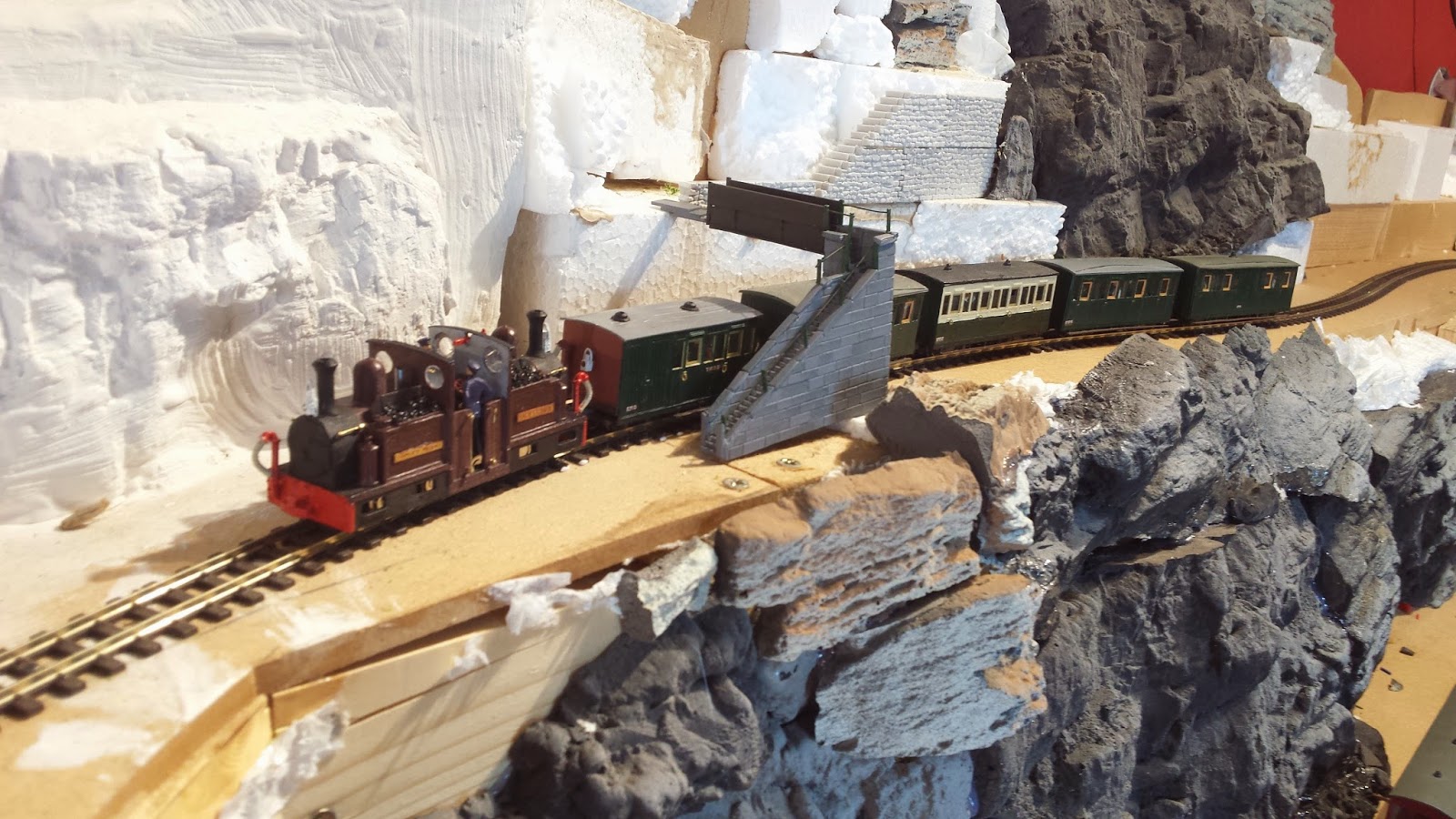 Lady Stoner with a maximum train of five

In the afternoon I roughly filled the cracks between the plastic rocks and covered over where the scenery was just lumps of expanded polystyrene. I tried to make it as close to how I envisaged the finished thing but only using a small trowel it was quite rough and had lots of trowel markings in it. 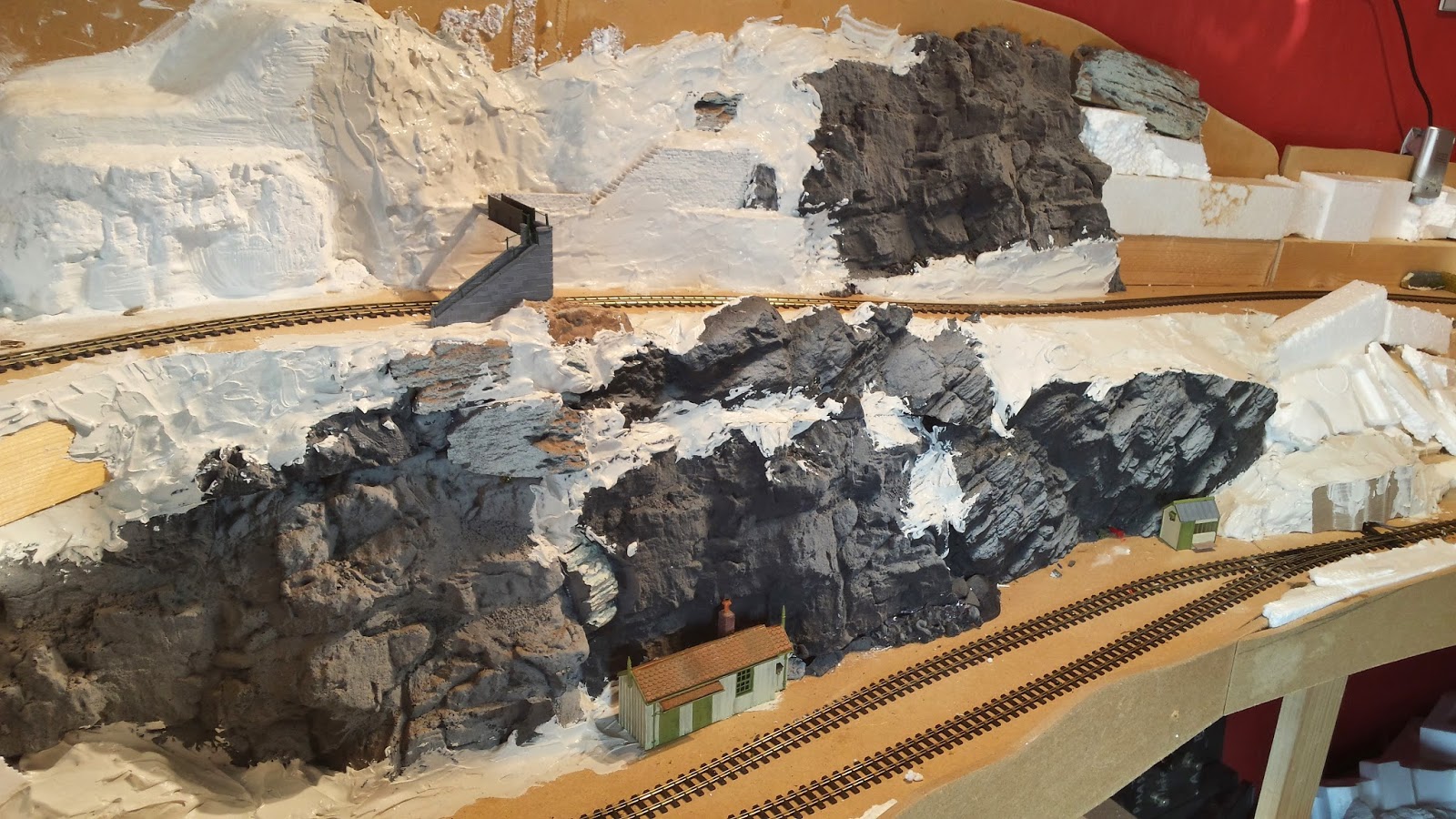 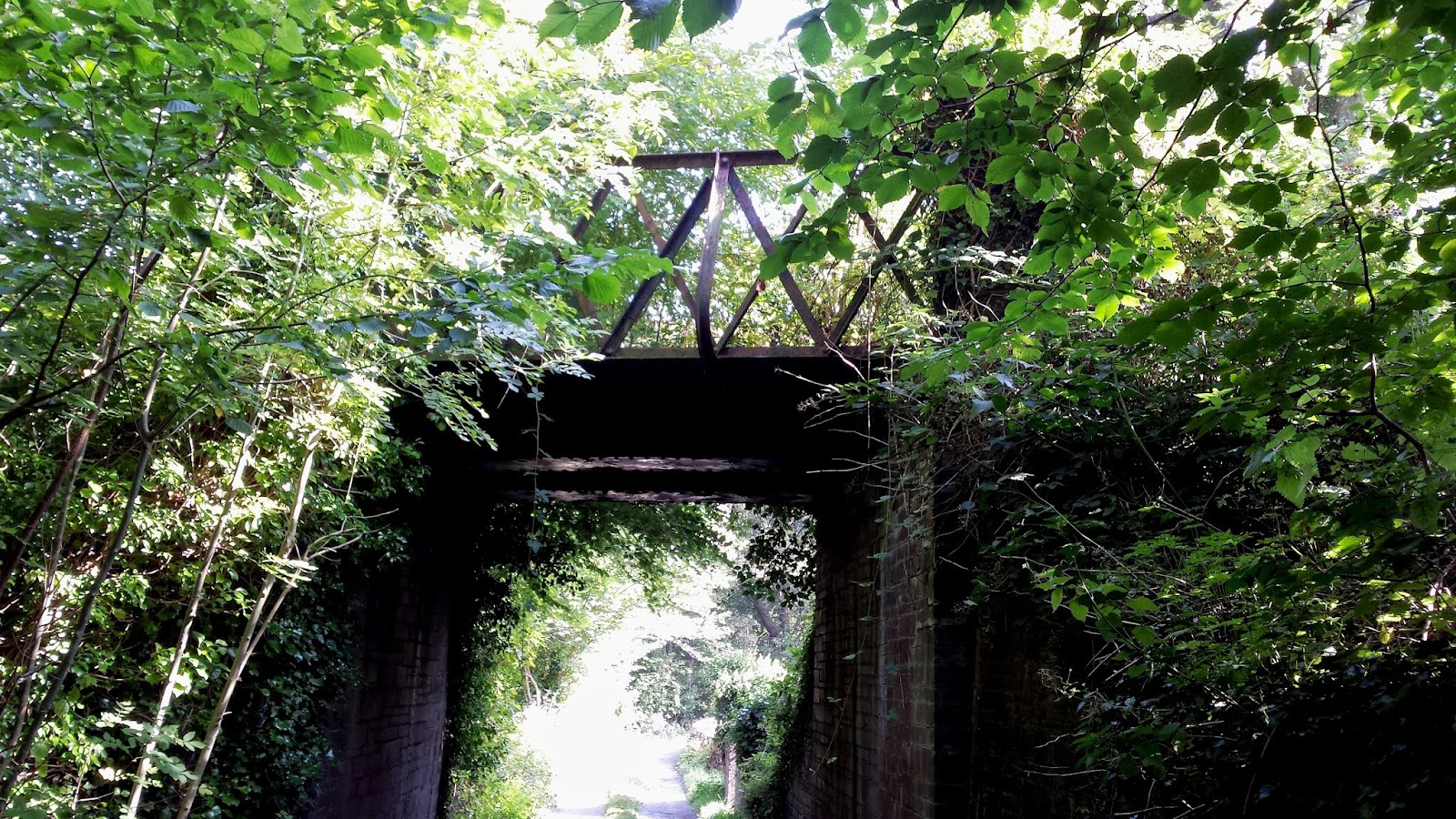 It being my daughters birthday this weekend I went into Bangor to do some secret shopping and to comfort myself for the pain this would entail I went a pretty way which just happened to go near the trackbed of the Penrhyn Quarry Railway﻿. Having been that way before I knew there was a rather nice over-bridge which was crying out to be photographed and then later, modelled. It is a bit overgrown but I took a picture anyway, I'll come back in the winter when the undergrowth is sparser. 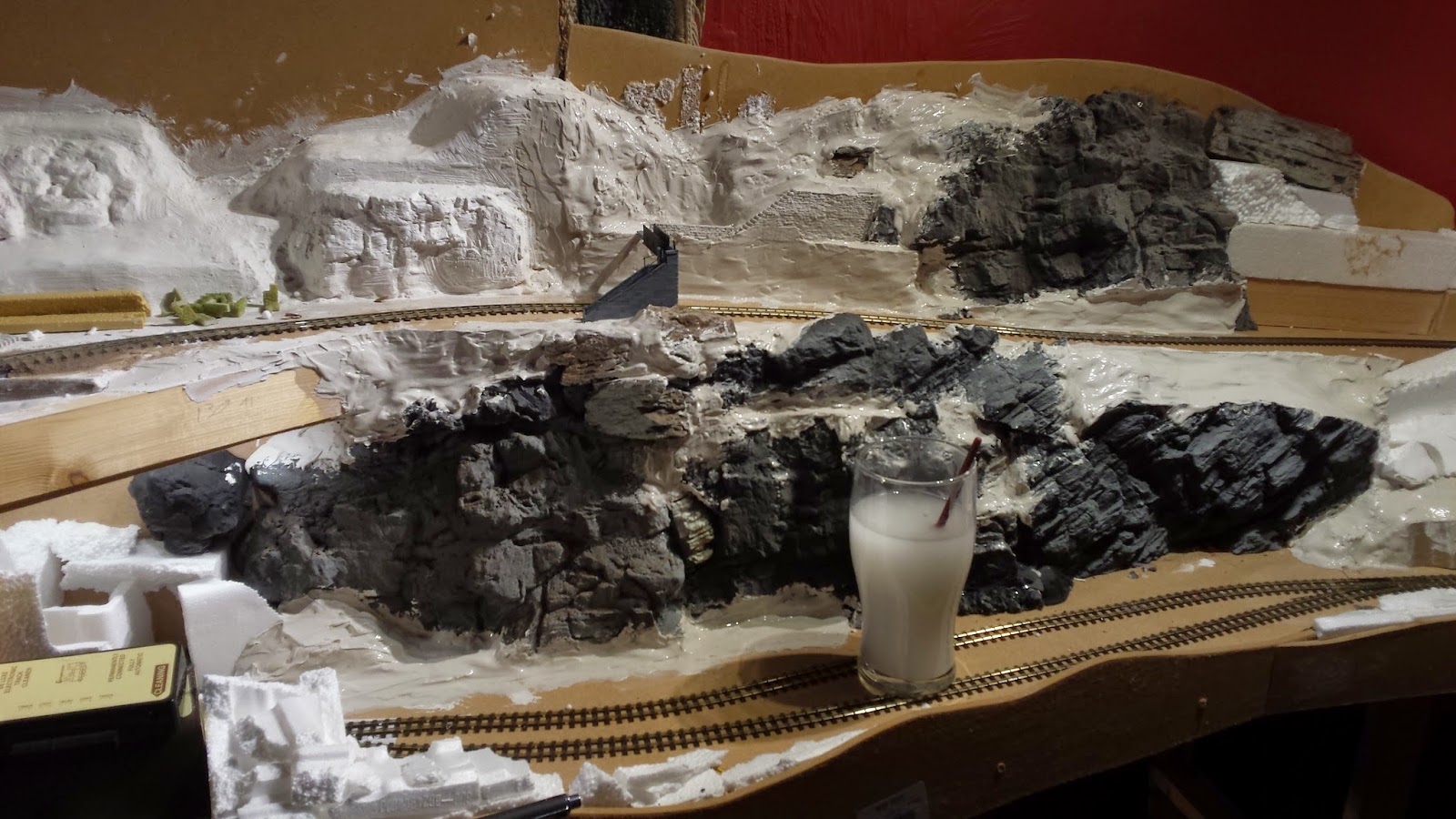 After dinner I sneaked off out to the garage again and took some water with me; firstly I used a brush and liberal quantities of the water to smooth and shape the afternoons plaster into more pleasing and natural shapes. Once I'd done that I couldn't resist getting out a roll of plaster bandage and moving on down the layout with some basic land forming. 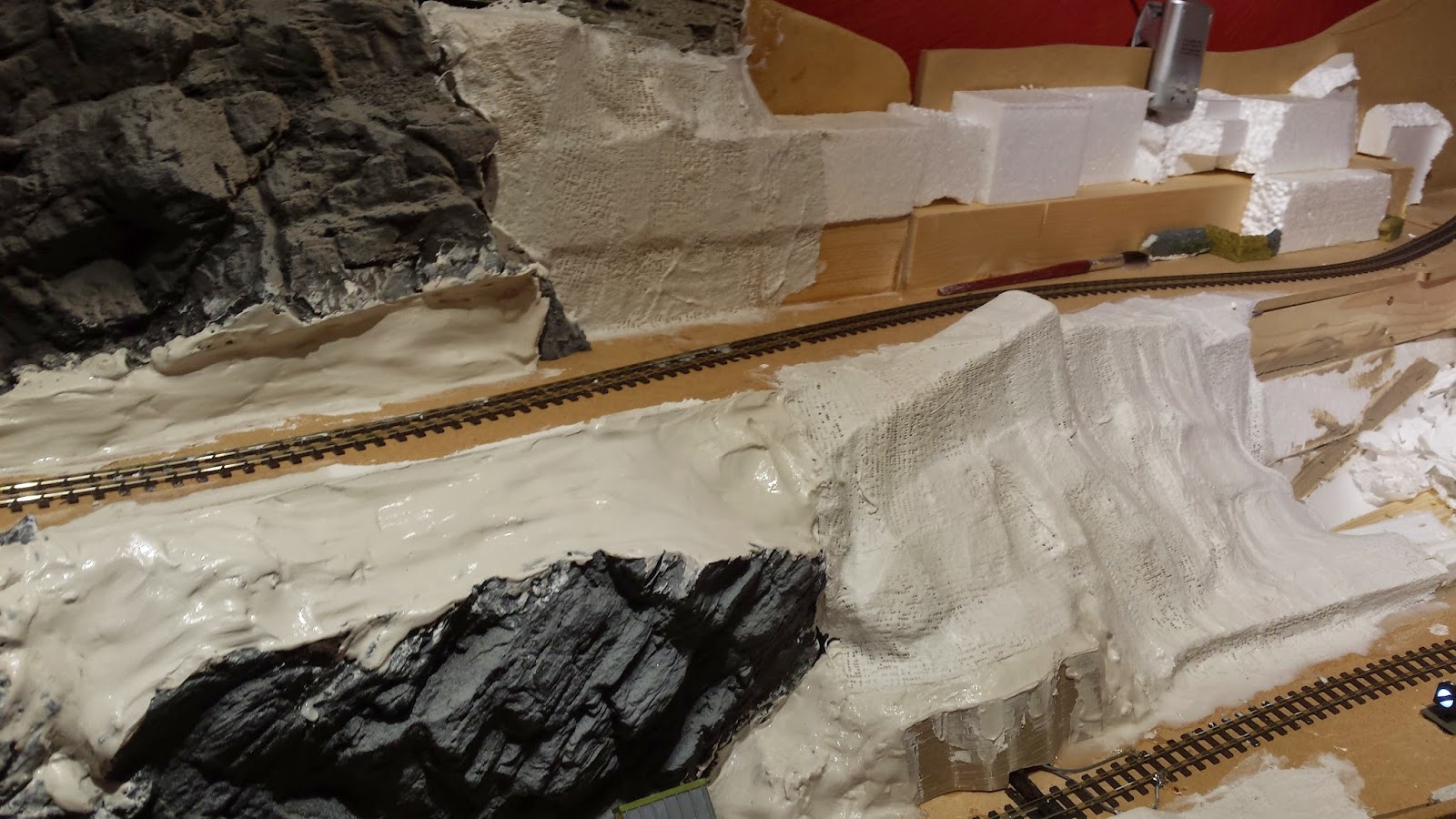 I also started the bandage work on the viewers side of the track too. I'm very pleased with how the feel of the station is coming along. A bit Tan y Bwlch but not too much. 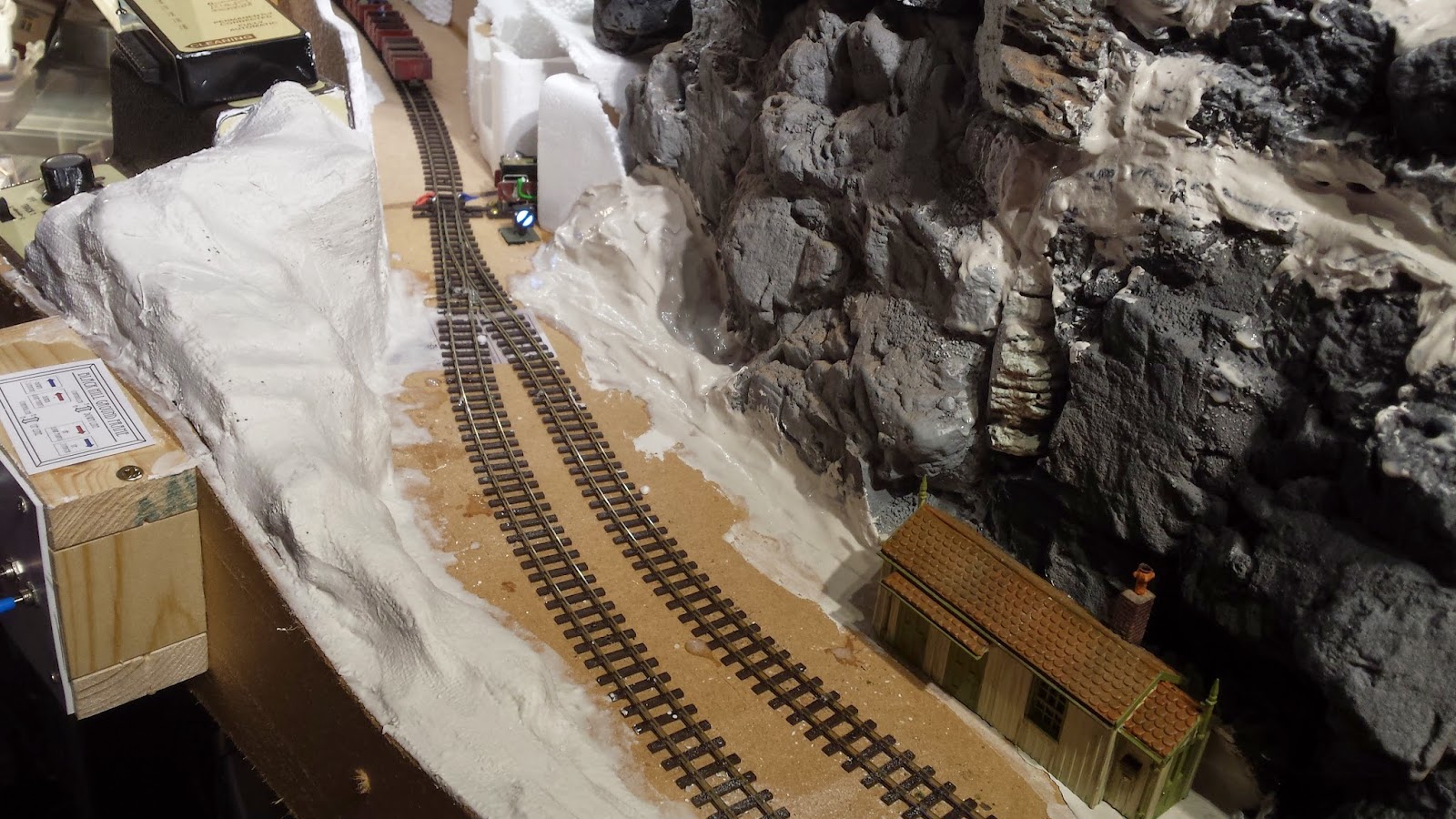 The bottom end with the station building in place 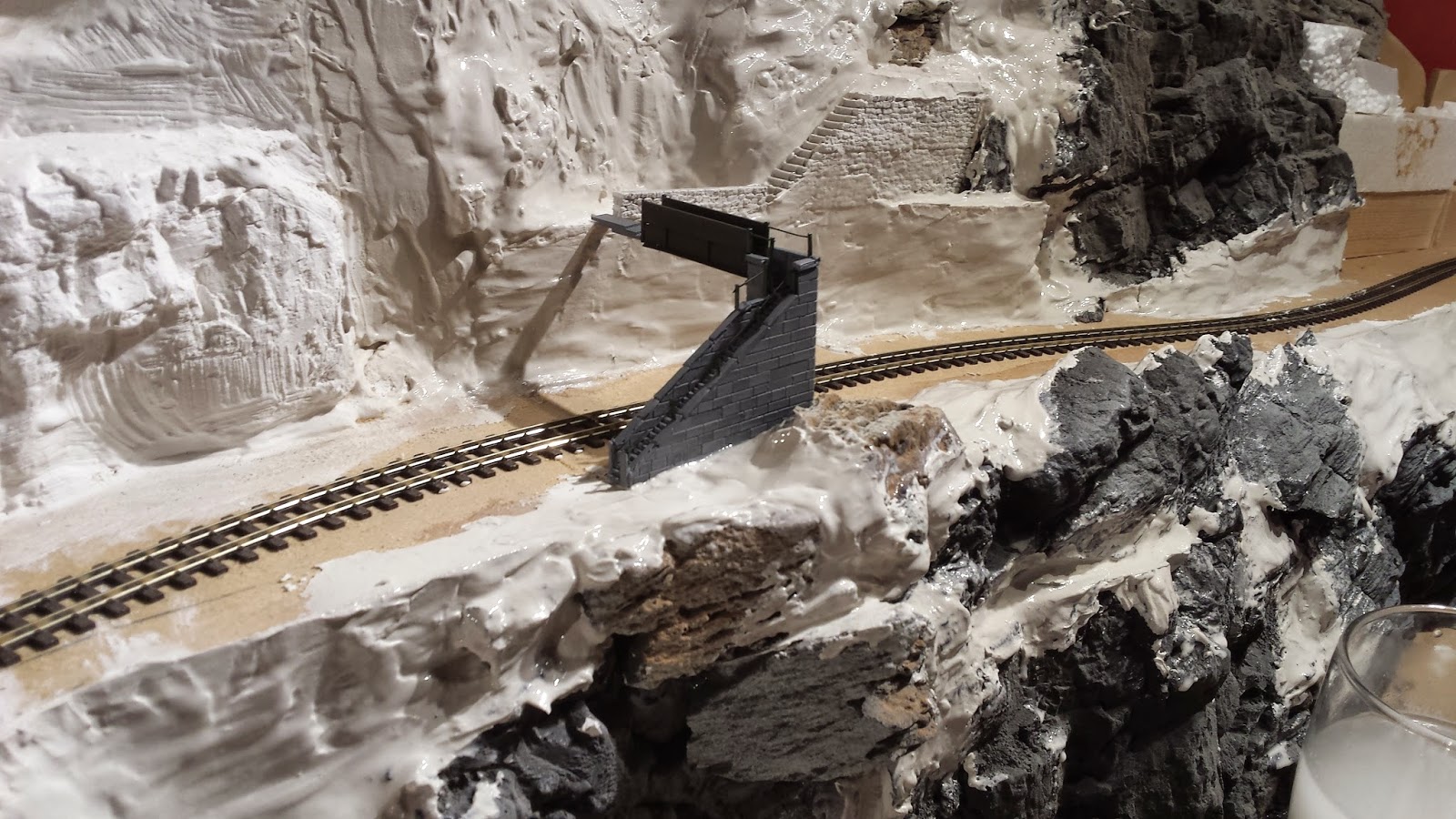 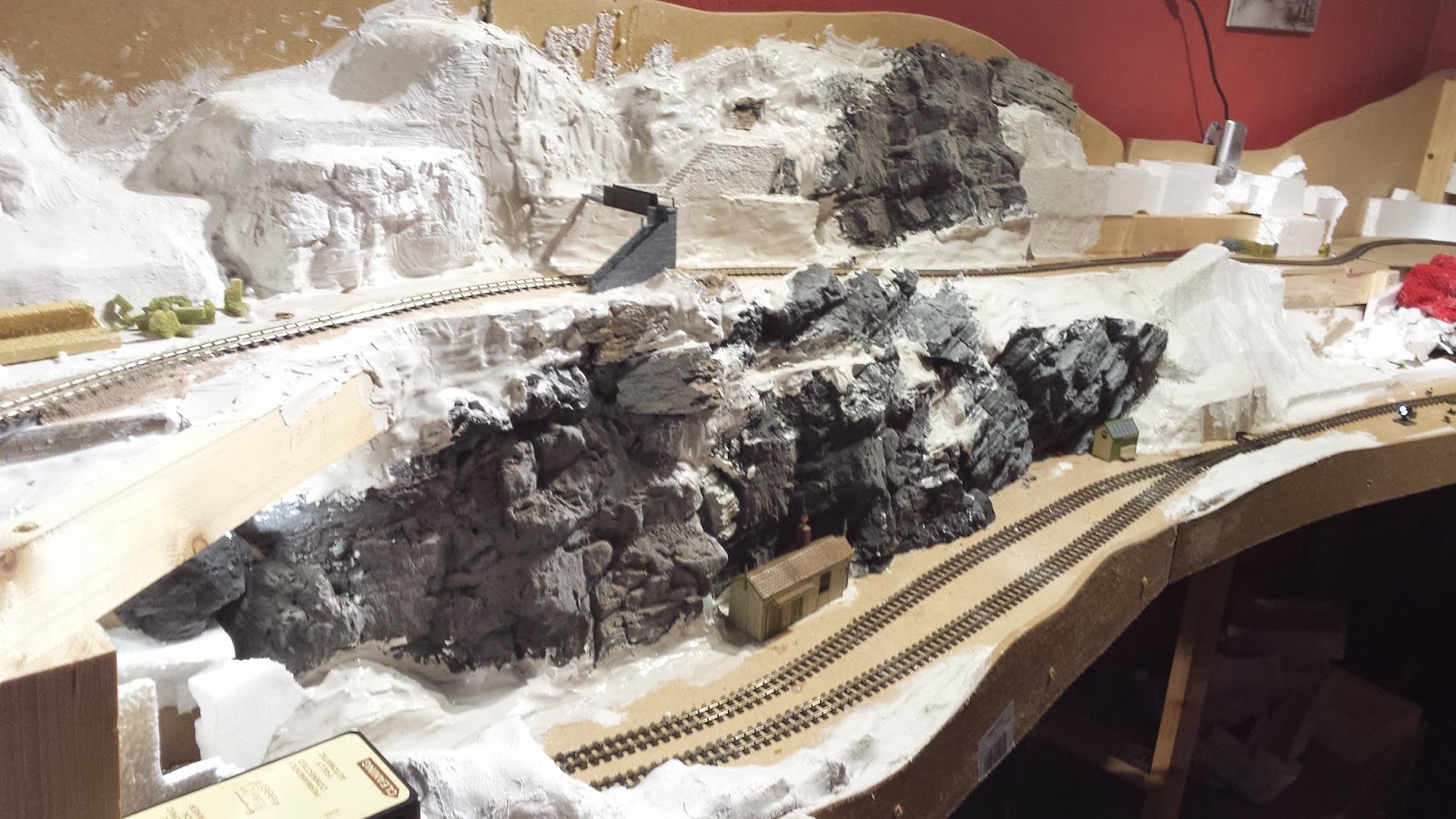 These last two pics show where I'd got up to at close of play. You can also see the ground frame﻿ hut which I rescued from the shop window diorama at work. It was a Bachmann Scenecraft green house but after a repaint and the addition of a bell and a walkway over where the rodding comes out I think it look the part.

I can't wait to get back in there and get some more done but With the Superpower gala and my daughter's birthday all coinciding it might be a while till I get a chance.

Spent a couple of happy hours with the hot glue gun and some fake rock yesterday.I also made some progress with where the new overbridge will go and also with the rock face which sits behind Blackhill Station.  It all needs some filler and of course some paint to finish it but the general look is better. 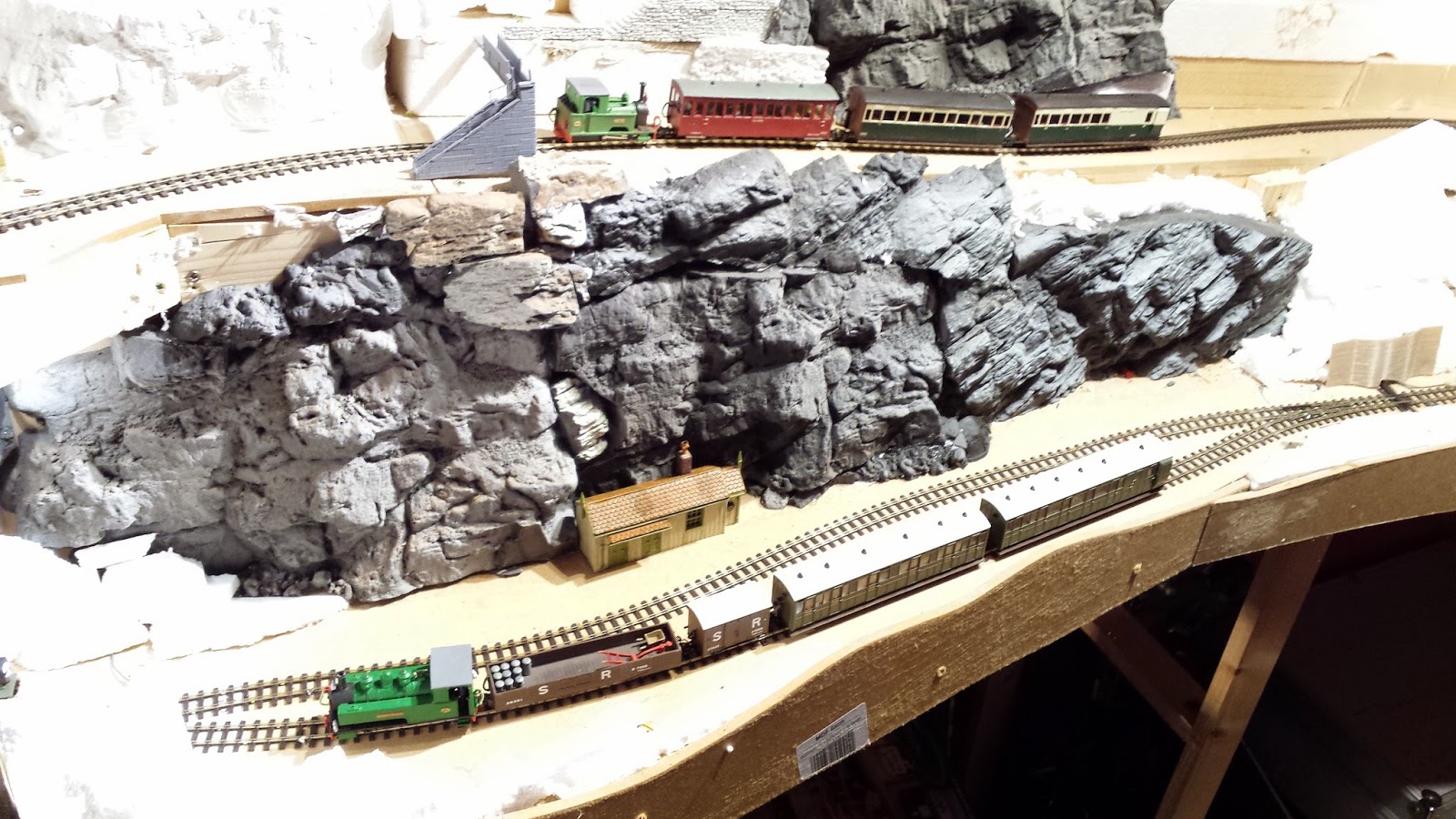 The overall view - the trains are actually diverging 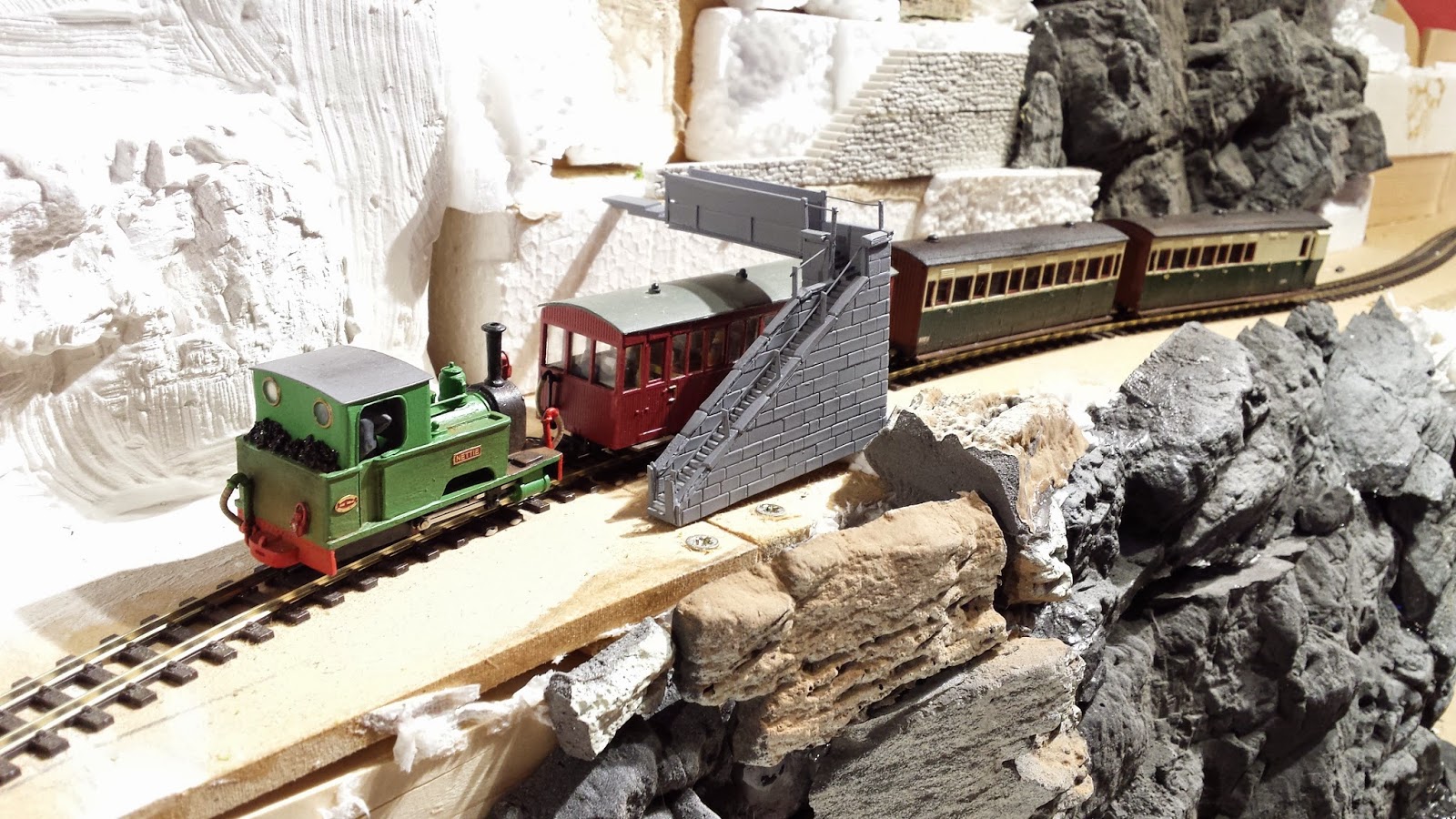 The new bridge in place

I decided that there isn't really room for a house so the bridge leads to a footpath which rises up over the railway and then up a flight of steps, not sure where it goes after that, probably behind a bush. 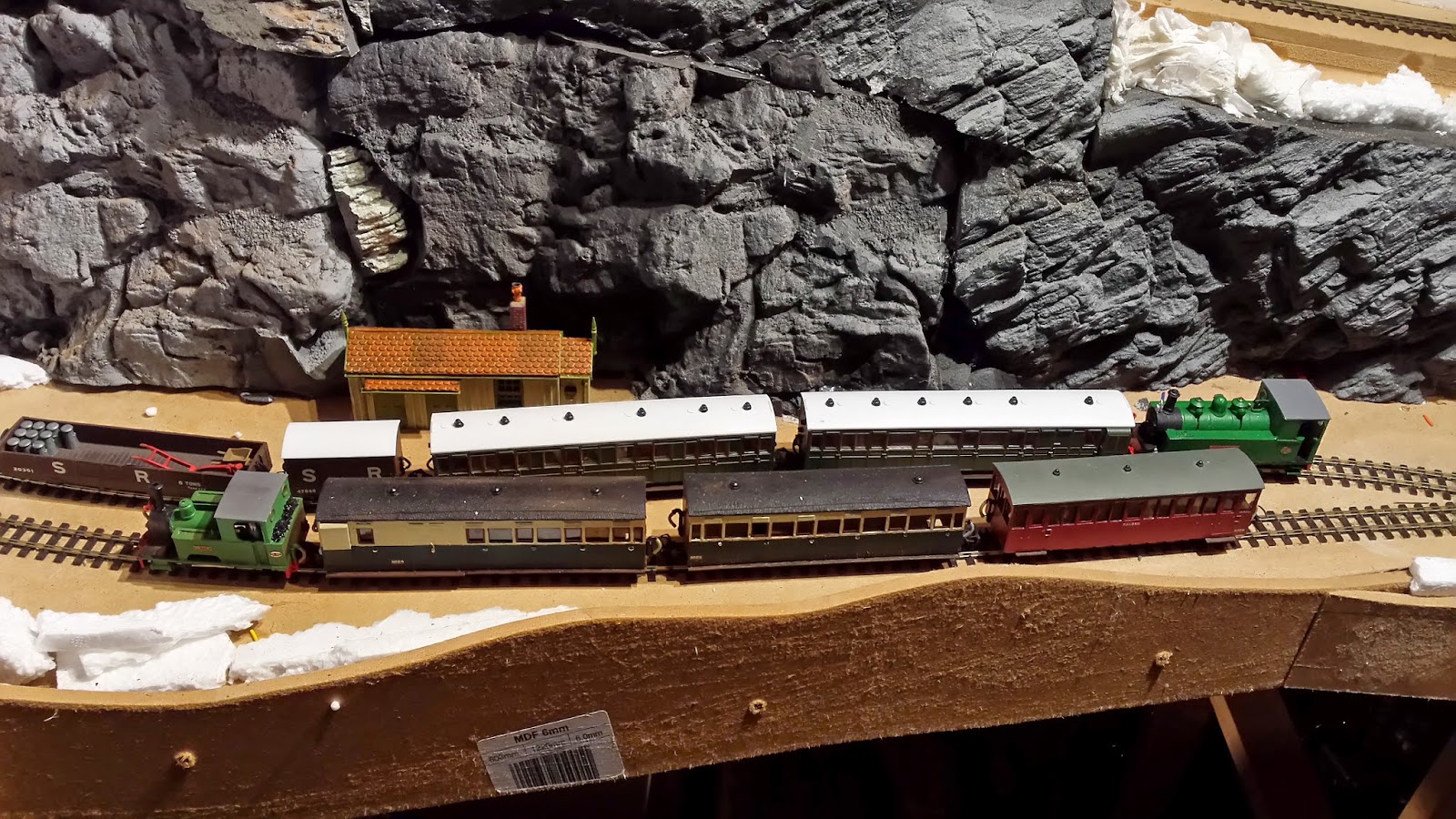 In modifying the rockface I've made slightly more room for the station building but clearances are definitely tight. I still need to sort out a water tower for the top end and a lever frame. I made a nice little lever frame box but put it on the display module in the shop window at work... I may have to nick it back... replace it with a bush probably. 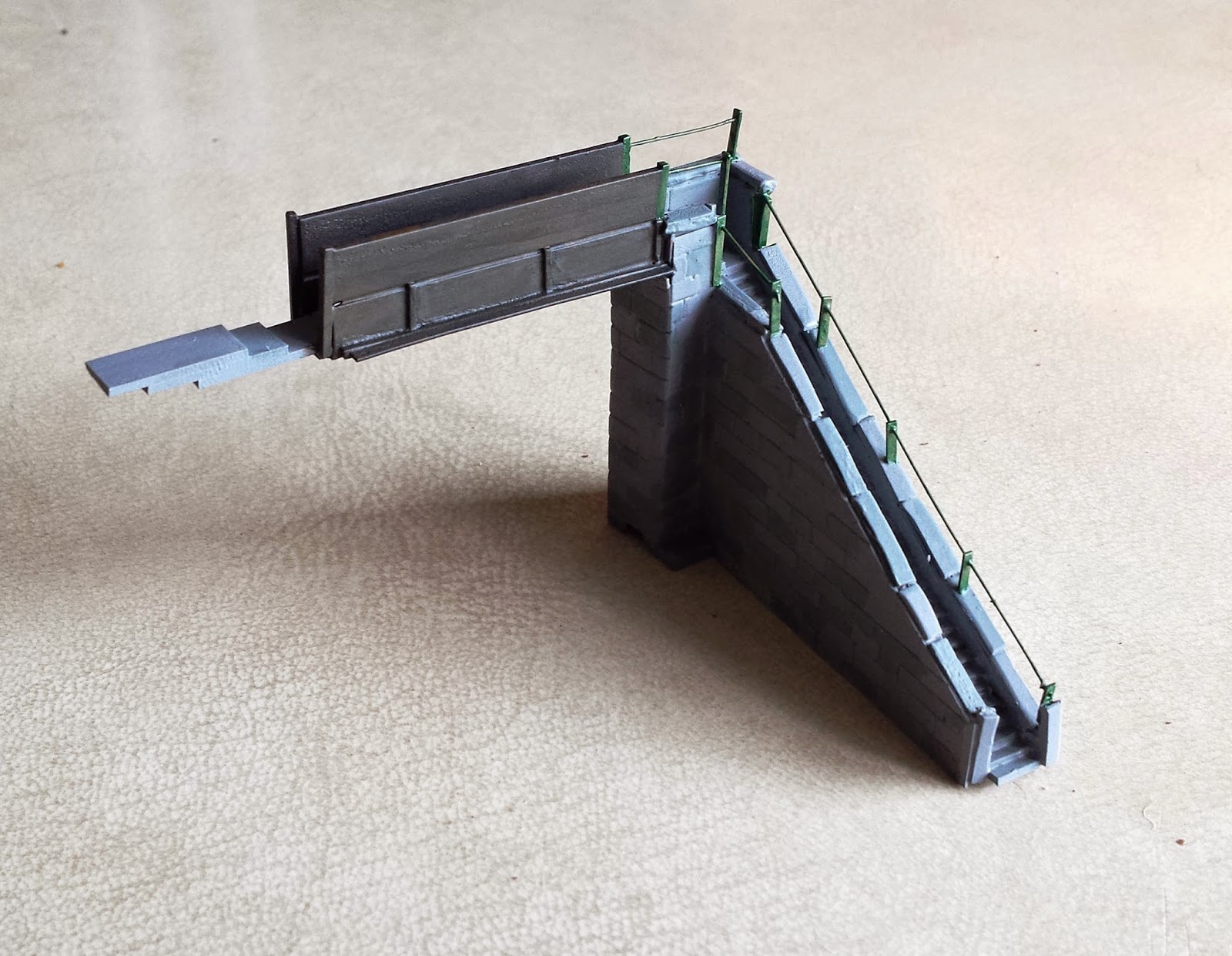 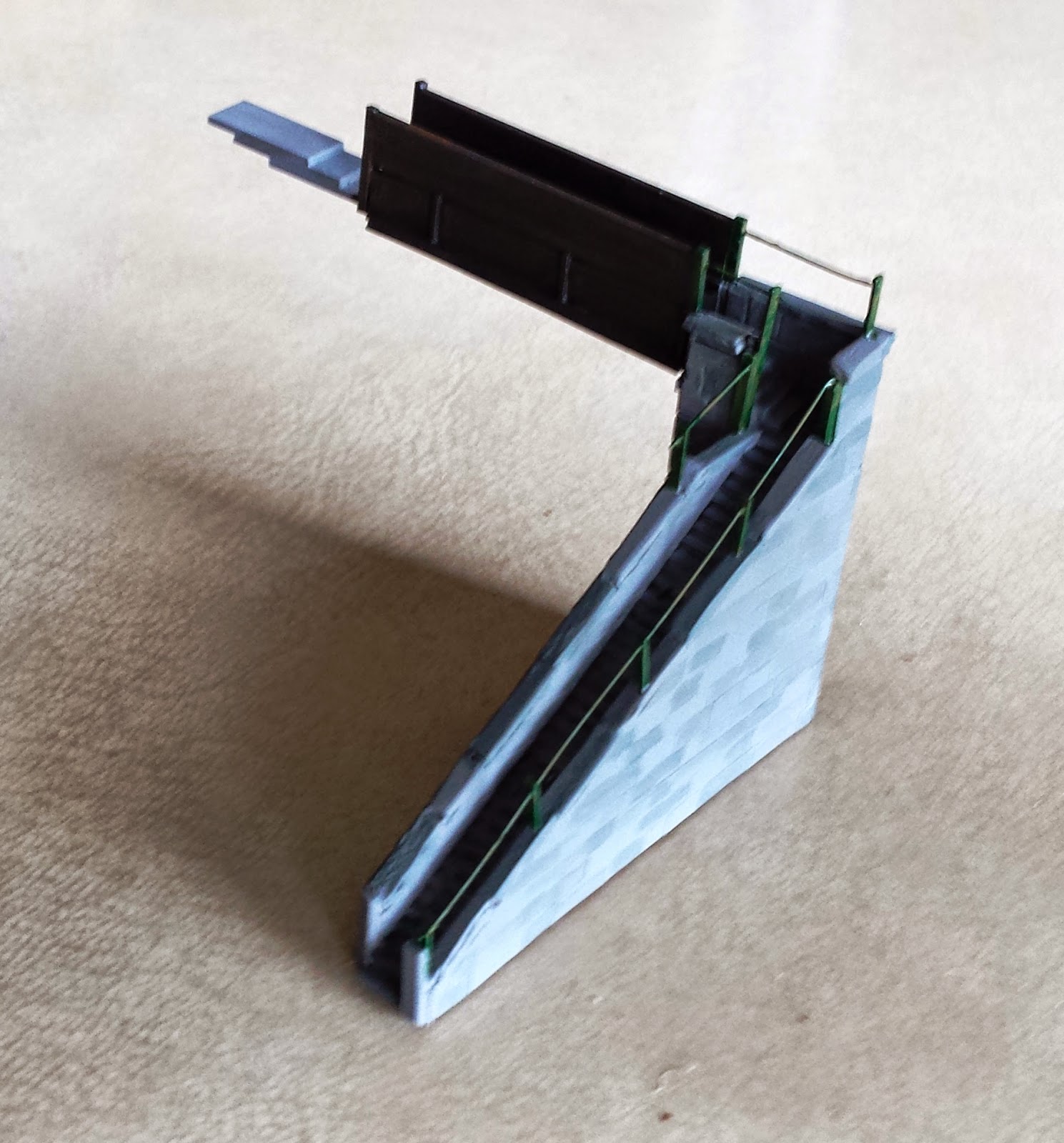 While I was working on the layout I gave the stairs a good coat of grey primer so I could paint them later. I had originally thought of painting them Stoner stone colours, i.e. browns and so on but seeing it grey it just shouted to be painted like an FR one; so thats what I did. I'm pretty pleased with the results, it needs some weathering but I'll do that when I finally plant it on the layout.