I don't know if I mentioned it but Arnold lane Wharf is going to Bala this weekend coming as part of the Bala Lake Railway gala. Well it is, anyway so I thought some titivation was in order and most importantly I needed to sort out the ﻿point motor which supposedly changed the king point to the yard. When I had added point motors and replaced the two sets of points I had never really got this one to throw convincingly in one direction so I set about fixing it. The motor was situated under the board and the actuator rod poked up through a hole. After several hours of buggering about trying to adjust the position of the motor etc etc, I gave up. 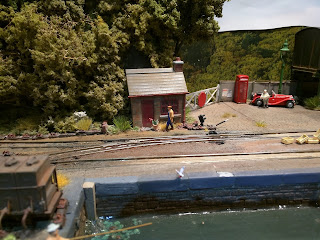 ﻿
The obvious plan B was to mount the motor above the board and hide it in the hut which was almost in the right place... so rip up the hut and the surrounding cobbles.... 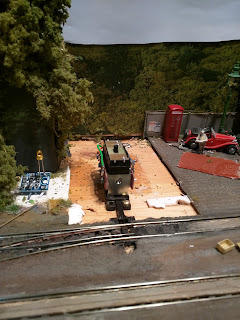 ﻿
Install the new motor on its base, reinstate the hut and the surrounding ground cover etc. 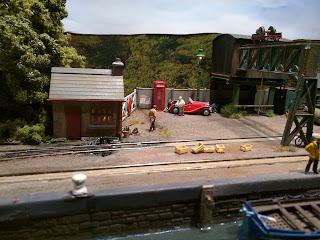 ﻿
Sounds simple and in fact it was pretty much although it took most of a day off.
As the exhibition is at Bala where the Hunslet is king I thought it would be good to get my two functional and tarted up. Gloria is my Chivers/Minitrains bash which I hadn't finished - but nearly. With a couple of evenings work on the paint and the detailing here she was, a bit shiny but pretty good looking.
The chassis ran beautifully as Minitrains chassis tend to so all it needed was the cylinders painting the same colour as the body. As the body is spray painted I squirted some of the Halfords paint into a lid and brushed it onto the cylinders. Lovely. Only I had managed to get some on one of the slide bars but not notice which locked the mechanism solid. Once the paint was dry I put the loco on the test track: nothing. Prod, prod - curl of smoke from the cab. Much swearing. Knackered motor. More swearing some beer and annoyedness.
﻿ 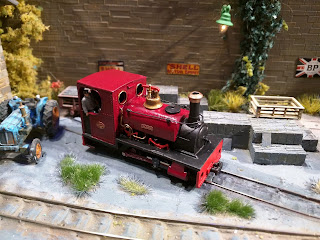 Pretty but useless
Having lain awake beating myself up for being a twat I thought a short term answer would be to use the motor from the chassis waiting for the completion of my NP Hudswell Clarke. After more fiddling about I swapped the motors over and cleaned up the paint from where it didn't ought to be and eventually all was well, she now runs nicely and looks good too. After the show I will weather her and dull her down but for now shiny is fine.
﻿ 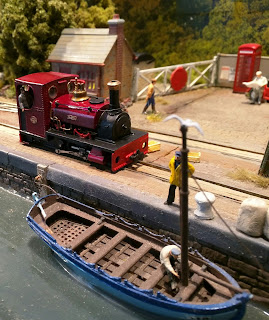 Functional at last
Also looking better for a tart up is my Brian Madge﻿ Britomart. I still think I can get it to run better having seen lots of his other locos running smooth as you like. watch this space. 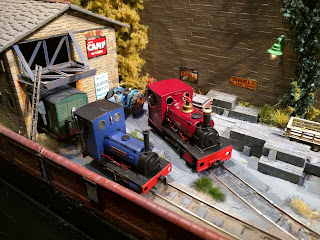 The terrible twins (not identical) 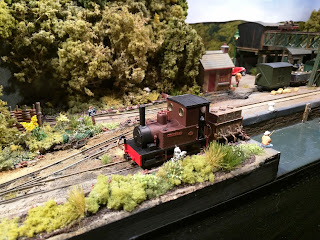 Oberon's name plates arrived too. Nice loco.
If you are at all curious as to the origins of the name Gloria I would point you towards the movie, Brassed Off. An excellent film and still in my top ten movies. 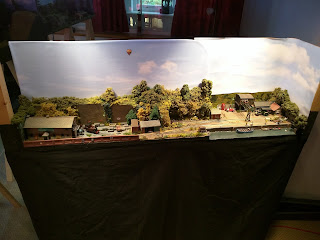 Hello again. It has been a while since I've posted on here as I've been very busy in the 'real' world. Some of this busyness has been unpleasant and upsetting but on the other hand some has been just busy doing not railway modelling things... oh, and work too.

I've recently made a few decisions about my layouts, firstly that there are too many. This and a lack of storage space for the expanding 'Underhill', have sadly made me decide that the stalled and unsatisfactory and unfinished layout in the garage must go. 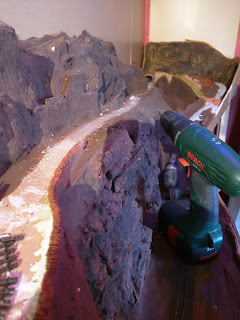 Track which had been laid but not ballasted was removed for future use. 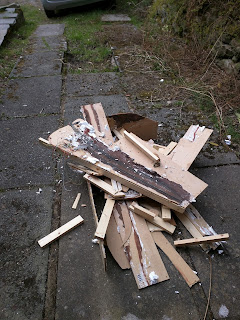 Timber which could be salvaged was stored but these bits were beyond hope. 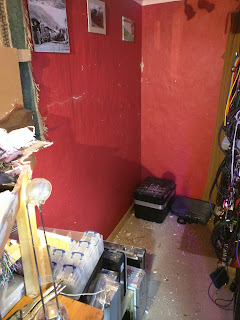 Suddenly there was a big space at one end of the garage. 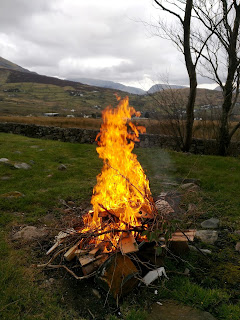 A bonfire was the answer.
I still have a large amount of demolition to do but have made a start removing buildings and anything else which can find a home on future layouts. It did make me a little sad but in all honesty I had lost interest in this layout as I had made several errors which were going to bug me even if I did finish it so being able to concentrate my time and efforts on 'Underhill' can only be good.
Talking of 'Underhill', I have finally found time to finish off the trackwork and wiring of the luxury fiddle yard.
I started work during the day on last Thursday which was election day in sunny wales so I then worked on into the evening/night while keeping half an ear and eye on the tv coverage. 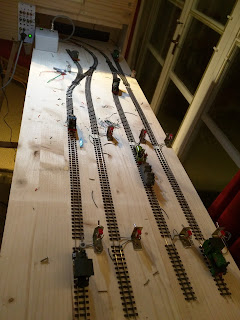 Each siding is split into sections.
﻿ 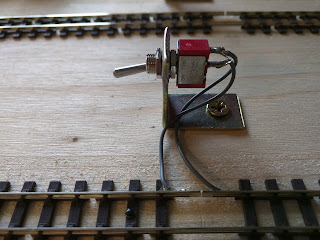 The sections are simply isolated with a switch mounted next to the rail break. 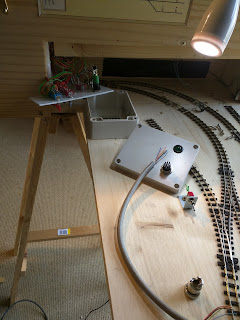 The electrics a simply chained over from the scenic board with a short multiway cable. 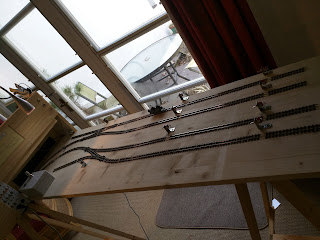 Having finished work at about 3.30am I did a quick text with a couple of locos. 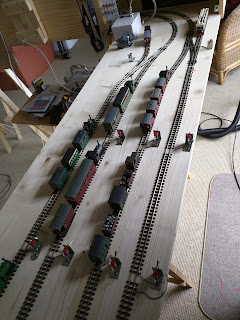 However, it seemed sensible to see how the new facility worked with a running session.
The good news is that after some extensive testing (playing trains) everything was found to work very well. Points are manually operated and no extra wiring has been installed as I wanted to keep everything a simple as possible. Maybe this will need to be thought about after a weekend of exhibition running.
The next development is the reconstruction of the Underhill end of the line. Plan A is to add another board at right angles to the current final one and have the line curve round into a larger station facility snuggled in amongst the town with the valley rising on either side of the station. The idea being that it is viewed from the short end of the baseboard as if you were standing on a hill above the town and so getting an end on view of the station rather than the usual sideways on one. It will be made so that you can go round the corner and look at the station that way too but if the layout fits into an exhibition without space for that it wouldn't matter.

In other news I've been up to the usual building more locos malarkey and have finished another CWR/Minitrains Fletcher Jennings loco but this time with a full cab, I think it looks great and is just awaiting plates to arrive to complete it. 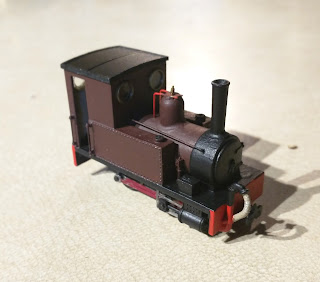 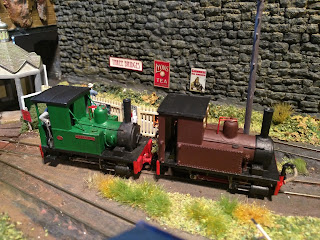 Titania on the Left joined by Oberon without plates as yet.
In addition to Oberon I am in the process of completing a Narrow Planet Hudswell Clarke which looks very nice and is destined to be the loco of choice for my SR set of PECO L&B coaches. I may even go the whole hog and plaster SOUTHERN down the tanks. 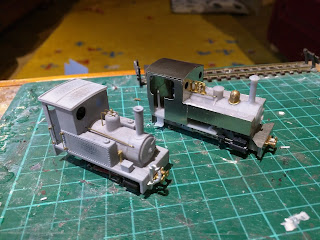 Again I've gone for the full cab variation and added a brass dome and safety valves.
﻿ 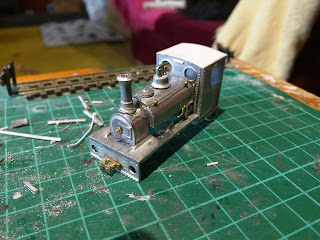 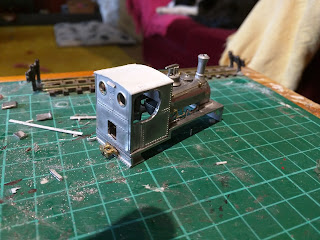 Most recent on the lap tray is a blatant rip off of the Chivers Cackler with Minitrains F&C chassis idea. I think this is going to be a favourite loco once it's finished. 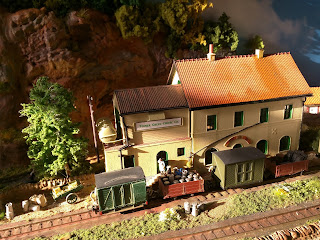