The last couple of weeks have been very busy away from The isle of Stoner so not much got done, however things have settled down a bit and I've found some time to get the lap tray out and to make some progress on my Fiji kit which will be known as Island as I didn't want to make an identical loco. 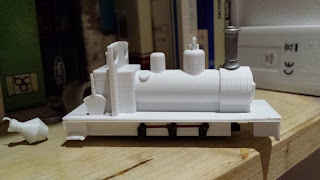 The first thing to go was the balloon stack to be replaced with something less colonial. 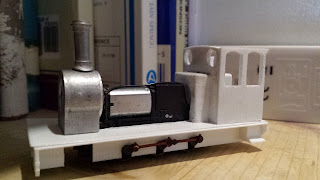 I started work cleaning up the 3D print lines which were quite pronounced on the boiler barrel and fittings, in the end I decided that it would be easier to replace the whole thing with a new scratch built part. I had a rummage in the box of bits and found a smokebox of almost exactly the correct size which I think is from a Parkside Dundas Hunslet kit. The steam dome is a Hudswell Clarke casting from RT models, again almost perfect size and the sand dome I suspect is a Langley WD Hunslet one. The boiler barrel itself is a section of plastic radiator pipe cover from B&Q. 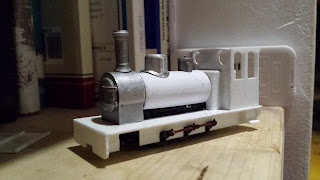 This all went together pretty well, the flat surfaces of the print are much better and easier to clean up. 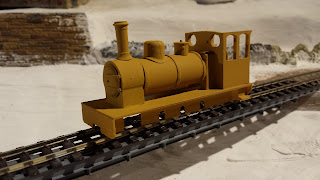 I added boiler bands from styrene strip and then gave it a good squirt of Halfords plastic filler primer which helped show what looked ok and where further work was needed. 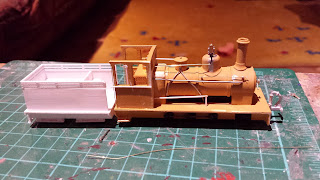 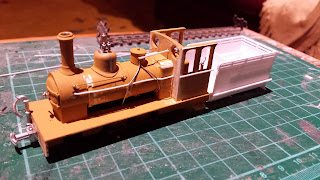 Once I'd done a bit more filling and sanding I started adding details to it. I've used one of Mr Ts couplings for the front because with such a large over hang I suspect that my curves might be an issue. Other than that I've used bits of fuse wire, styrene and brass wire to add pipework and so on. The whistle is from a Minitrains F&C body which I used the chassis from and is perfect for the job. 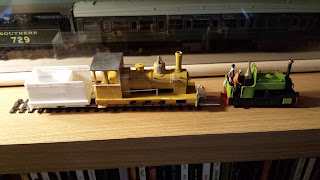 This was the state of play this morning after adding a whitemetal cab roof last thing yesterday. Normally I replace these with styrene but the weight helps to balance the smokebox casting. The tender is also in evidence which I've built pretty much as intended. (First time for everything﻿.) The other Hudswell Clarke is stting in front of Island as I've just fitted a lovely lost wax casting of a reversing lever instead of the rather unsubtle Wills signal box lever previously there.
Some more primer next and I can't put off doing the chassis mods next...
No comments:

I'm on leave this week and apart from trying to get some domestic stuff done I've found a few minutes to finish the new loco, Lucy and to do some scenery work on the big layout. 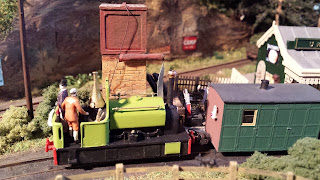 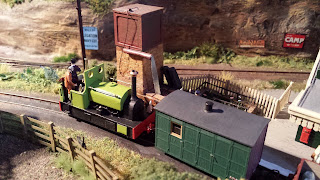 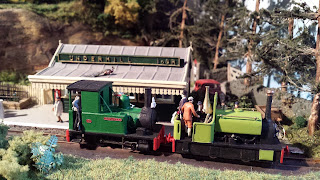 Not so sure about the main colour but it seemed like a good idea at the time. Its a Halfords car spray which makes it a bit glossy but while I was in Halfords I noticed that they sell a matt lacquer so I duly bought a can. Being a cautious soul I decided to try it out on some thing which wasn't so crucial if it spoiled;  knew it would be ok on the spray paint but the acrylics were an unknown quantity. Lucky I did as the paint on the roof of the van I sprayed reacted and bubbled up. 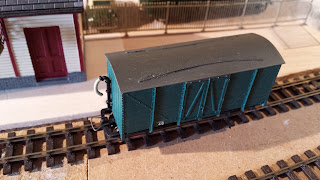 Interestingly, the main green colour was fine but the roof was not. I can't remember the makes of bthe respective paints but I'm pretty sure they are different. Anyway another varnish not to be used. 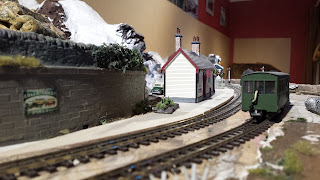 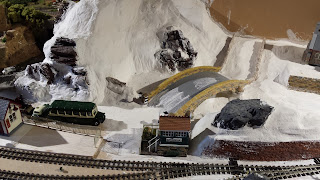 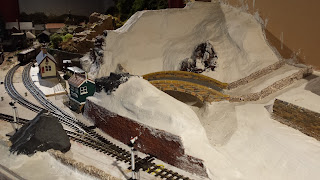 I've finished off the plaster work between the old layout and the new and put the balsa platform former down. It's coming together and I'm quite pleased with the overall look of the thing. The only bit of plaster left to do is the 'ballast' between the platform and 'Collie Bridge' down the hill. really I should do the wiring and make sure it all works but I'll probably find a way to put that off for a while longer.