Finally got down to some modelling and rather than getting on with the layout or finishing the loco to be known as Island I settled down to make a couple of new ones... I have made a little progress, some forwards and some backwards. The loco is now sprayed black, my original idea being to now mask off the black bits and have at it with a maroon colour spray but I actually rather like it in black. The backwards progress was to try to fit a Dapol chassis which has more valve gear but inside frames. Despite measuring both the space available and the donor loco it doesn't fit and now I've chopped up the frames from Island so they will need remaking to move forward. Doh! 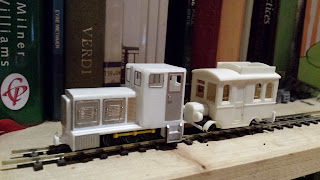 The two new vehicles under construction are a Eurong NS3 diesel which I have bodged onto a farish 04 chassis as I couldn't afford another Minitrains F&C chassis and the one I have is destined to go under the new Narrow Planet Pamela when it arrives (soon I believe). This is a mixed media kit, having a 3D printed body with etched nickle silver overlays. It went together easily and then I fiddled about getting the chassis inside and secure. It looks ok to me and with plenty of added weight I think it will make a useful addition to the mainline diesel fleet. I've added the cab steps from a Harlech Castle kit but they were slightly too long and almost dragged on the floor so I reduced them to one step.

The other vehicle is one of that nice Mr Rushby's railcars which I am building as a omnidenominational multi-faith porta-church. This means that that it will have stained glass windows, hopefully illuminated from the inside, and will be available to help with any spiritual crisis of a lineside nature. It's a resin kit and with a small amount of fettling it went together very easily. It sits on the ubiquitous KATO 11-104 chassis. 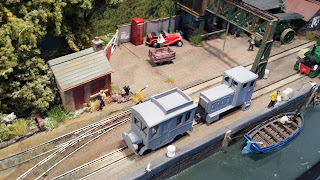 Here they are down at the canal in primer 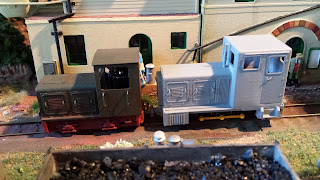 This is the Finished NS2 with the unfinished NS3 for comparison

This is it with one coat of Humbrol spray acrylic maroon on
No comments: