I've been really busy at work and I've been very involved in my other hobby (music) recently so the layout has languished﻿ where it got dumped after its last show at the 009 Society AGM. The show went well but the niggling old point at the Town Quarry junction caused a few derailments and some rolling stock just refused to traverse it at all. 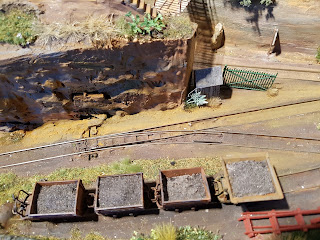 The troublesome point
It was a legacy of when the terminus was right here but had always been a bit odd... so I took a deep breath and decided that it needed to be replaced. 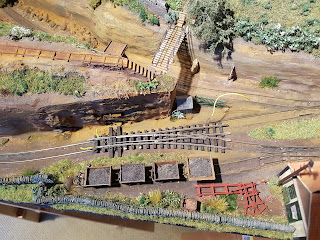 Plan A
Initially the plan was to replace the point but with a longer 'mainline' one, this would have allowed me to keep the short siding but on closer inspection it wasn't going to be possible to get the geometry right so I reluctantly waved goodbye to the siding and used a left hand point to allow the straight through track to have the straight track of the point. ﻿ 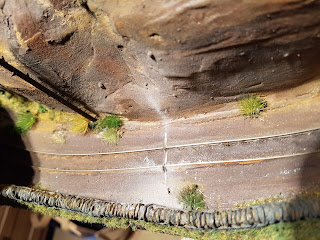 The first cut
Using a slitting disk in the trusty Dremmel I made a cut right through the track at appropriate points of all three legs of the junction then it was just a case of rip the track up and hack away all the surrounding ballast.﻿ 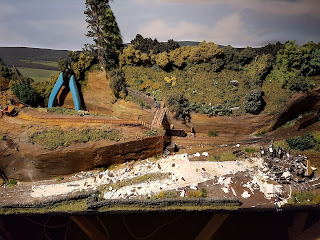 Savagery in action
Once the area was cleared of debris a trial fit of the new turnout was tried and it was apparent that I needed to cut back a couple more cm of the mainline to get a good angle all round. This done it was also apparent that the old point motor which was (and still is, although unused) would be in the wrong place. Without smashing up the scenery it would be impossible to hide the motor above board level so I fitted it directly to the point with the frog polarity switch also fitted and cut a hole in the baseboard. 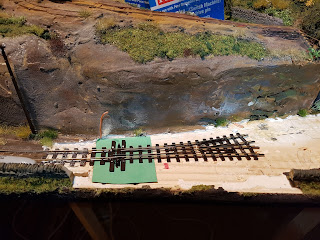 The piece of green card covers the big hole in the ground. 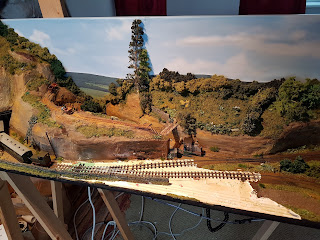 Track in place and testing about to begin
I had done all this work in one long evening and when I came to test it I was delighted to find that the test train ran straight through on the mainline but when the point was switched to the quarry the whole thing ground to a halt. It was 2am so I went to bed.﻿ 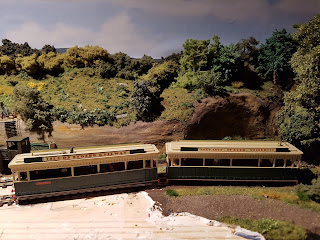 More testing, this time with the two car tram which would not pass the old point
After a night of sleep and a day at work it was obvious that I had left out an insulated fishplate and once that was replaced all was well. The new alignment looked much better and worked properly so a job well worth the mess and stress. Next came the bit I like doing, i.ie. the scenery. 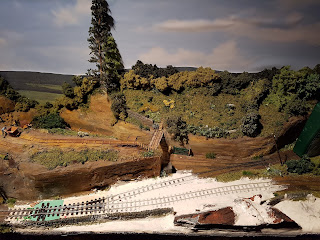 Ready mixed filler is my ballast and scenery of choice
Instead of a building which now didn't fit I went for a lump of countryside to replace it. Following my usual theory of using a cast urethane rock bedded into ready mix filler﻿ to represent the soil I bodged it all together and refitted some of the Skaledale dry stone wall. 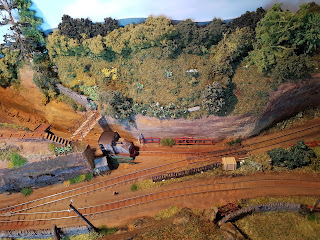 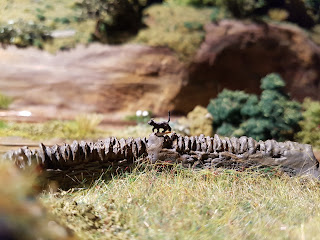 Even the cat has returned, he was on the fence before but roughly in the same place. 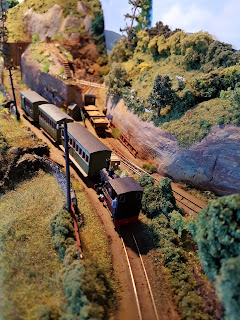 All done
The next chance to see Underhill Town is at the Bala Lake Railway gala exhibition which is on the last weekend of May. It is a 2 day show which runs in the school in the town of Bala but there is a bus connection from the railway gala so you have no excuse to miss the show. Promises to be good fun; hoping to have Heljan Manning Wardles to play with and to sell too... you never know.
The layout also features on the front cover and in the third instalment of my article in the latest edition of Narrow Gauge World magazine which I rather chuffed about.
2 comments: