Knock it down, build it up 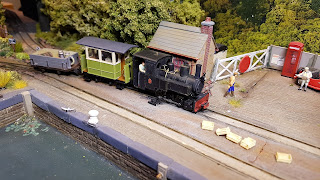 It's always nice to start with something new so here is my slightly modified Minitrains Progress with a Jelly Models O&K coach which I have just finished, having bought it at Manchester before Christmas. I was holding back as I promised myself that I would get on with the reconstruction of Underhill before I built any more rolling stock... 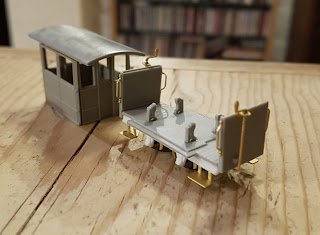 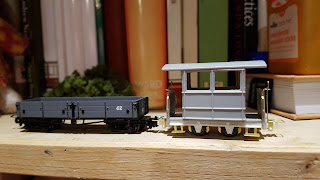 The unpainted coach along with a Bachmann D class wagon
It is a mixed media kit with a 3D printed chassis, resin body parts and etched brass details. It all went together pretty well although the resin parts needed some cleaning up and the roof was/still is a bit, slightly warped. I thought I'd flattened it out but on gluing it on, it is still not quite flush at one end on one side. A nice kit and recommended. I suspect I will need another one at some stage. It might make a nice little motorized tram with some bodging... hmm thinks. 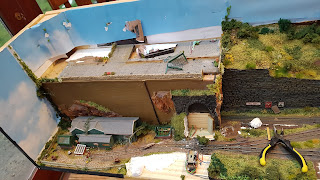 Demolition is complete on the Cheese factory board, with all the buildings and removable scenic bits removed. This was the second part of the layout to be built and it has developed several faults over the years so its time has come. I can't fit all of the layout into the garage so something has to go. 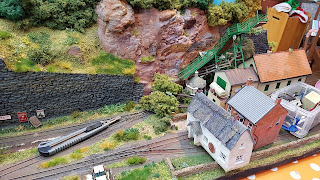 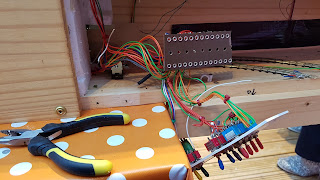 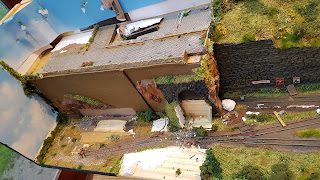 I was pleased to be able to rescue the Herb Nursery intact and hopefully I will be able to find a home for it at some stage. The row of houses will form the missing side of the Parrot Inn Square so they will be used too. Another 'reuse of a building plan' is to fit the lighthouse which was on StRuth somewhere near the beach section, I've always liked the lighthouse and so it would be good to get it out of storage. 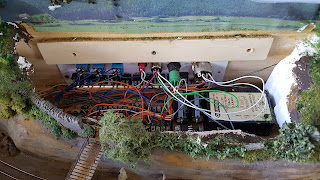 Town Quarry electronics
The next thing to do is to relocate the control panel from the rear of Town Quarry module to the front as The back of the layout is going to be against the wall. This will be fiddly but relatively straightforward. I also need to do the same thing on the Underhill Town﻿ module and all the wiring and access to the screws holding the panel in place require the raised town area to be removed. Having built it in a big rush I didn't make it removable so will necessitate some fairly brutal demolition work... and the rewiring and reconstruction.

Hopefully the above sort of plan thing should give an idea of what I'm aiming for. It's all a bit mad but because of the internal layout of the garage I have to have Underhill at the left meaning that a new entrance from what was previously the dead end of the layout has had to be invented. Anyway we'll see how it turn out. Next to the new bit will be the beach and then a fiddle yard. 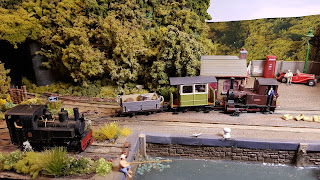 Arnold Lane Wharf will be at a few shows this years, starting with the NG show at Rainford on the 17th Feb, then Narrow Gauge North on the 10th March and Bala over May bank holiday weekend.
No comments: