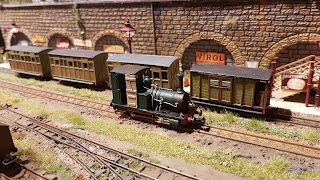 I'm very pleased with the way Dolgoch has turned out, with some help from those who know about these things I finally got the pipework right and eventually the cylinder lubricator annoyed me enough to move it to the right place too. All there is left to do is to get a transfer of the name to add to the boiler, some crew and some weathering. I've ordered some 4mm scale people as the usual 3.5mm Preiser ones look daft on such a well known, small loco. 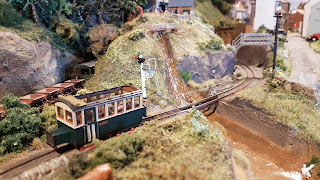 Having spent so long at the lap tray it felt like time to do some jobs on the layout that have been niggling for ages. First job was to reinstate the home signal which used to be just where the new brook got built. Unfortunately in removing it from the layout the mechanism got broken so my intention was to just install it as a lit up but not working unit. I carefully soldered extension wires onto the remains of the wiring, drilled a hole in the baseboard and glued the post in place. I got out a battery to test the LED but being an idiot I forgot that in the mechanism for the working signal there is a resistor to protect the LED from high voltages... like the 9v I blew up the LED with... Doh. Anyway it looks nice not lit up. 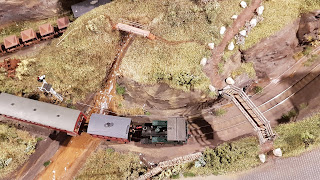 Next task was to install the wire from the signal box to work the signal and also the rodding from the box to the station king point and the yard entry point. I've had the bits for 5 or 6 years since I bought them at Warley but have never got round to it. Very fiddly little bits and bobs but worth the buggering about in the end, the rodding won't pass close inspection by anyone who knows how the real thing works but it looks good enough at usual viewing distances. 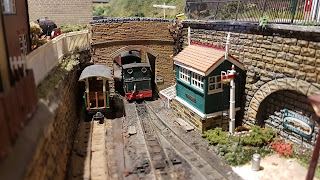 The rodding passes under the track and goes into the box under wooden walk ways. 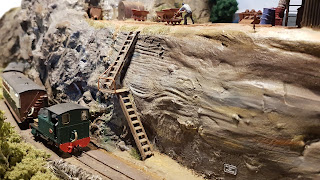 Another small job and only a five minute job as to add a handrail to part of the steps up to the quarry from the halt, just a bent up piece of brass rod and a lick of paint. Much safer for the little chaps.