I've done a fair bit of modelling this month, the first job finished was the power car for the DMU set, not only does it run well on the KATO 11 109 but I'm also pretty pleased with the look of it too. 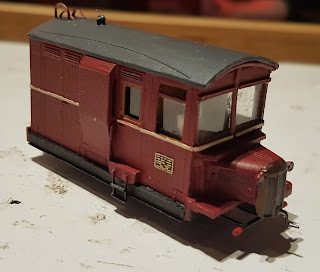 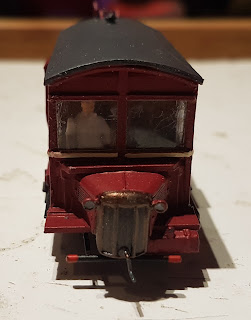 The next project was to build the non motor driving car and I'd bought a Dundas VoR van kit to build one from but then I came across something similar I built for use on the St Ruth layout. It was part of a train that ran up to the lighthouse. 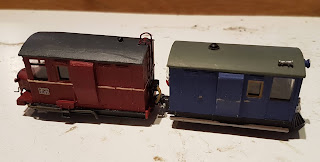 Being made from the same kit it was pretty much what I intended to do from scratch, it neede a bit of tarting up and some detail adding to make it look like it was designed to be the second part of the set.

Long story short, I took it apart and added a variety of styrene strip and changed the roof vent for a whitemetal torpedo like the one used on the motor car. 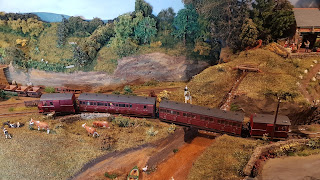 Here it is all finished and on a test run up the Underhill branch. All I need to do now is build the rest of the layout so it has somewhere to run...
In other news I found a ROCO six wheel diesel for a reasonable price and set about anglicizing it. This was inspired by seeing Dave Malton's visiting loco last month, also the very first ready to run loco I had was one of these many, many years ago. This time I was determined to make a better job of it. 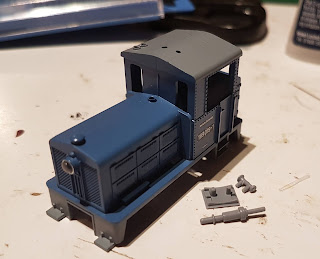 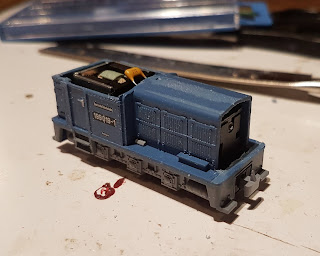 The main offending parts were the cab, the radiator and all the stuff on the back of the cab, so it all had to go. 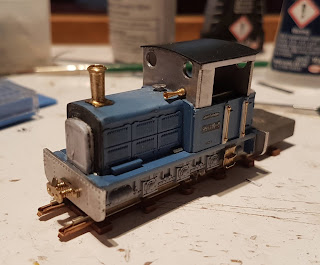 I spent a happy day filing and gluing new bits in place. The radiator is from an Airfix lorry kit, the exhaust pipe and new cab steps are 'n brass' castings as are the handrail knobs. Theses are the smallest I've ever used but they look the part and are very nicely made. The horn is a brass part from A1 Models The cab front and rear and the buffer beams are whitemetal parts from the big box of bits. My favourite RT Models brass PQR couplings completed the job. 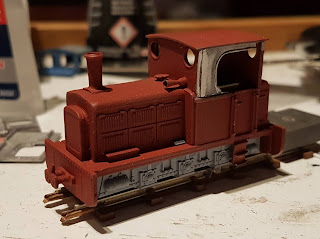 Once it had a squirt of primer I realised that I had basically just remade the cab and it still looked very continental. A look in my book of Hudswell Clarke diesels showed me that locos of the type that I was aiming at had curved cab windows and so a further rummage in the bits box came across these cab sides which once cut and filed to shape do the perfect job, to my mind. 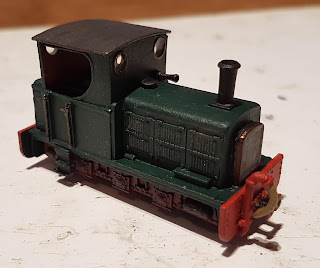 Green seemed the obvious colour, I've ordered works and name plates from Narrow Planet and it will be called 'Granville' to go nicely with the big red Drewery named 'Arkwright'. It has been a funny sort of year, after all. 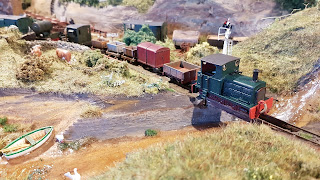 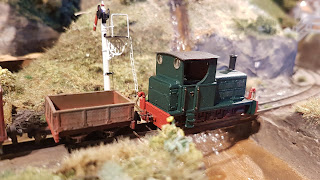 Here it is in action on the works train, it needs running in as its rough as you'd expect from these and I think I'll probably change the motor out for one of Svens conversions. I did one before and it made a world of difference. 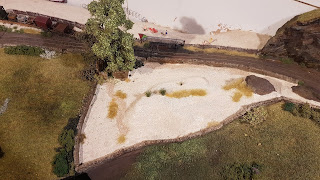 On the scenery front, I've been looking at the sandy field which has never looked as I wanted it to really so I think I'm going to cover the sand in grass to make it more of an ordinary looking field. I've got some nice tents somewhere so maybe a camping field would be nice. I really need to bite the bullet and get some proper sky too, then I can sort out the beach once and for all. 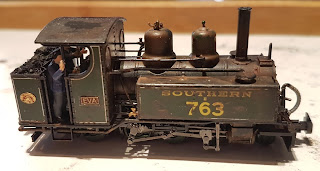 While I was painting the 'Granville' I removed some of the overdone weathering on 'Eva', you couldn't see the livery at all and as that was why I bought it in the first place that seemed a bit thick. Only thing is, now it notices that the nameplate is wonky.