I've been a busy boy this week and have made good progress on a number of projects. First thing of note is the final painting and weathering of the new van and cattle van. 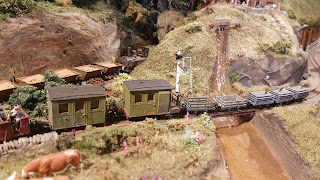 I'm please with the van especially as it has come out exactly as I hoped. I look forward to running some proper trains with it which at the moment is not really possible as there is no left hand terminus... 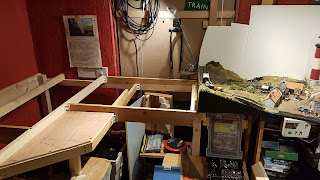 Woodwork progressing on the new section 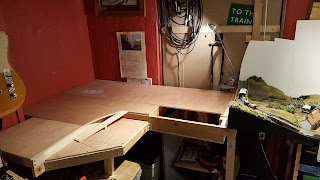 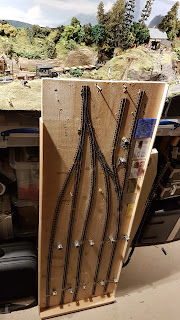 The old fiddle yard now redundant... hmm I wonder if it would work with an exhibition layout, as yet un built? 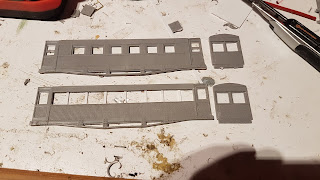 By way of some laptray distraction after a rummage in the cupboard I dug out out an Ashover coach kit. Not being one to build a kit the way nature intended and also not really being a fan of the prototype I concluded that a more open window aperture might make a difference. 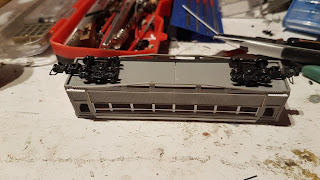 Having briefly tried the Dundas WD bogies I concluded that it needed a better bogie and mounted nearer inboard. I tried some spare VoR ones but then I came across my secret weapon for coach bogies, i.e. KATO 11 103 spare sets. They run very sweetly and I easily replaced the Rapido couplers with some ROCO ones from my box of stuff. 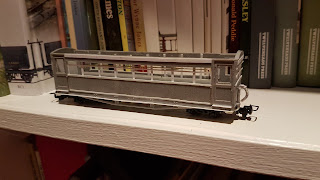 Here it is as it stands now. It's virtually complete but has no roof  as it didn't come with one, I may try the beer can metal technique as I've never done that and I fancy a can of Guinness. Two weeks into dry January...!!! 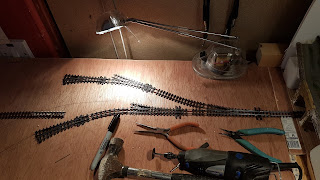 Meanwhile, back in the garage I've started track laying. This is slightly complicated by needing to install point motors underneath the baseboard, meaning it has to be moveable as I can't do it from underneath. I'm trying out some of the new PECO PL1000 jobs which are easy to install unless you are a dickhead like me. I'd done the unit at the far left of the board and all was well, just trimming the motor pin to length. I thought I'll be elegant and use the Dremmel and a slitting disk as it will look nicer and be easy... Actually I managed to cut it too short and bugger up the pair of points too. Expensive cock up. 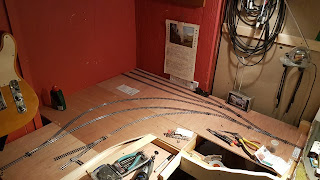 Three hidden sidings and a loop all laid now, the goods siding is all cut to size and will get nailed down once the boards are permanently installed. 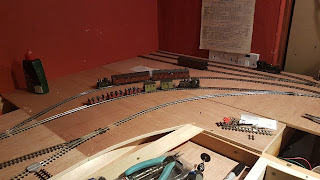 A couple of trains passing in the loop. 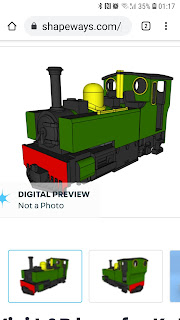 Mr Dave Malton has been uploading some interesting things to Shapeways and I decided to have look but this one had escaped my notice, it caught my eye and so one is under construction in the magic factory as I type. It sits on a KATO 109 so will run nicely and will be a third tram loco for the line (actually forth....) It should be a happy stable mate for the Fourdees loco and the Minitrains Tram.