Work has continued on the extension of Underhill. 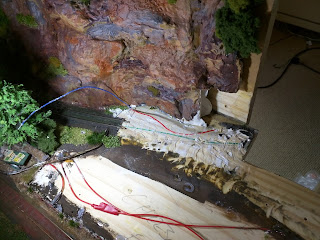 Cheese factory removed and the track cut back 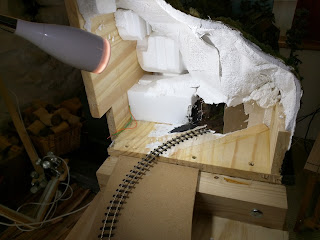 Both ends of the original layout are now cleaned up and prepared for track laying. The first woodwork for the track bed on the new section is glued down. The depth of track bed now need another piece of 6mm MDF and then a 2mm track bed as the final 'ballast'. Once that is done it will be time to complete the track laying. 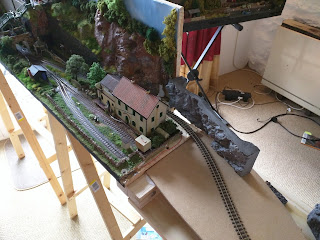 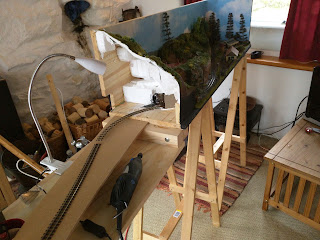 I've decided that to keep things interesting operationally there will be a halt towards the Underhill end which I've built this evening. It has a hint of the original Dduallt station building but is in no way a model of it. 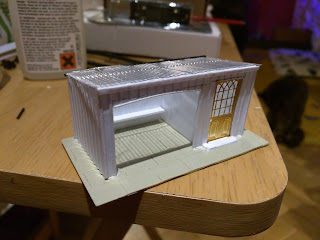 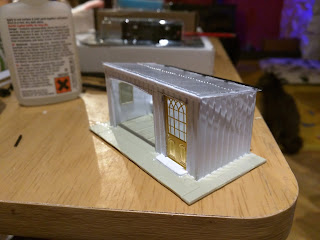 I've made a bit of a boo boo in that I've sealed the room with a door so I can't glaze it but I'll find a way round that later, it's in the garage having been given a waft of primer.

Last episode I was ripping things apart and contemplating a new era. Well, that new era has begun.

After a visit to B&Q for the timber I set about rendering it into either kindling or the next bit of layout. 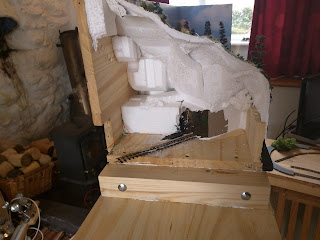 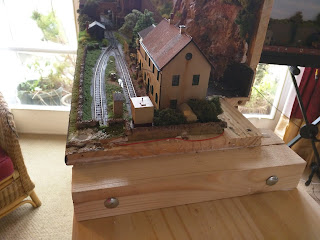 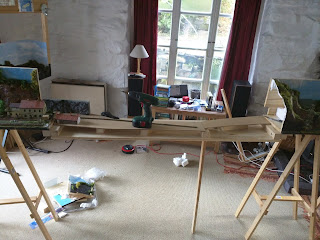 The plan is to have the shelf board hang lower that the two end boards so that I can have scenery below track level for a more realistic look. After much head scratching the plan (at the moment but subject to total change) is that the new bit will be a section of line running along the coast, the beach will slope down to the back from the track bed. I want to show the islandy look of the scenery.

I had contemplated putting a passing loop on here for more trains per square inch but it would take up too much room and I just want to have some countryside to let the train wander along in. There will be a halt with a single lamp post and maybe a little ramshackle shelter. On the viewing side of the line will just be fields with some cows in. Simples.

Modelling has taken a bit of a back seat for a while but this doesn't mean that the little grey cells haven't been hard at work. As I mentioned before, Underhill works well except for the giant and wonky leap between boards. I could see two solutions - 1 Chuck the whole thing away and start again. - 2 Re build the join. For a while 1 was in the lead. I decided to set the layout up and have a play, take some pictures and write and article for the 009 News. In the process of doing this I had a good look at the layout and decided that I would miss some of the good bits. Time passed and several trips back and forth to work and insomnia hours in bed were spent thinking about a new plan. I came up with a nice roundy roundy with a branch line plan which would fulfill all my desires for a new exhbitable layout. 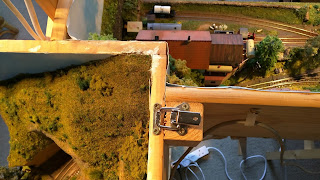 This is the cause of all the trouble, where the boards join is a mess. There is no solid connection and so the track doesn't always line up. By the end of Great and Small II I had got it perfect but I'd spent a day and a half swearing and trying to fish trains out of the impossible to get at bit I had stupidly created.

Apart from the brand new layout I wondered about a new connection but couldn't see how it could be done with the current geometry and then it clicked. New geometry. So for now Underhill lives. Plan A is to insert a new board between the current ones, this will turn an L shaped layout into a straight one about twelve feet long. 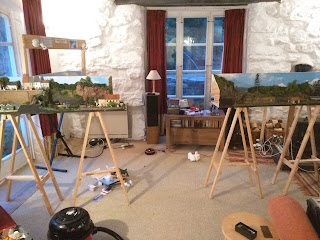 I grabbed a couple of hours today and taking my courage and the electric screwdriver in my hands I removed the end panel to see what would be possible. 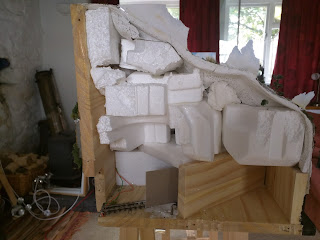 What I found when I removed the end.

To do what I want to do I needed to be able to straighten the track out so that it joined the new board in an end to end junction rather than half way round the corner as in the MK1 version. With very little poking about the polystyrene came out leaving the mod rock shell unsupported but perfectly sound. The bit of timber was PVA'd onto the baseboard so took a knock with a hammer to loosen it but out it came. 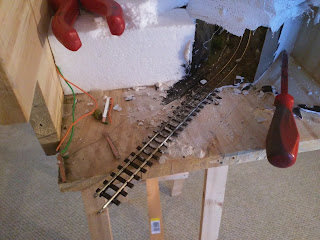 Next phase was to remove as much of the plaster 'ballast' as possible, this actually came away easier than I thought it would. Although the track has been damaged in the process of demolition there is enough left sound to cut and connect a new bit to make a decent new board join. 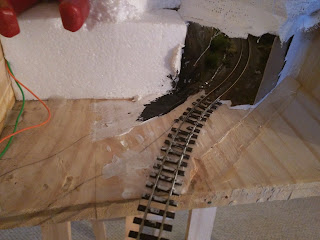 This shows the general idea.

Next I turned the screwdriver and crowbar on the matching end of the Three Bridges board. In principal this bit should be simpler to change, it will need a piece of wood inserting in the gap where the other board connected. 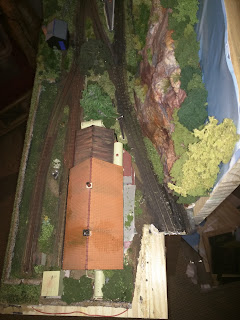 This shows the cheese factory with the baseboard gap behind it. 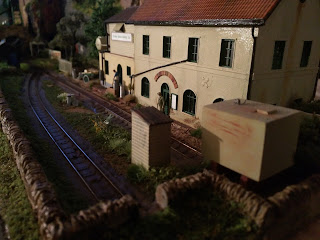 A previously un-viewable angle now revealed by the removal of the end.

Next job is to work out how to make a reliable, repeatable join between the old boards and the new middle bit. I have a plan but this time I will give it plenty of thought before plunging into woodwork world. I'm quite enthused with the new look layout.

I'm also having thoughts about extending the far end of the Underhill board and completing a run round loop... one thing at a time though.