I'm pleased with the new cobbles in Rock Beach square, they were a bit of shock after the previous bluey/grey effort. I've fiddled with the colours somewhat and added a couple of drain covers. The main change is to the water fountain which now has a paving stone area around it which I have given a kerb stone of styrene strip painted in black and white stripes. I suspect it might need a little toning down but for now it's fine. 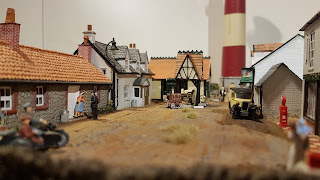 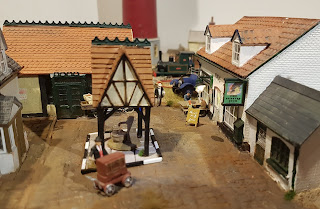 For a while now the point motor on the turnout at the end of the platform at Underhill Town has only worked in one direction. I don't know why it died but it did, I've tried wiggling and poking it but came to the conclusion that the motor needed replacing. Quite tricky to get under the layout now so I put it off. However, in the spirit of making the layout work properly I decide that I'd bite the bullet. 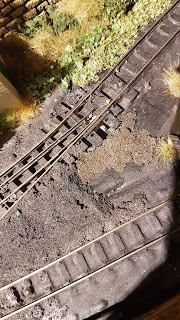 I unclipped the point motor from the point so that it would just slip downwards... Nope. I gave it a wiggle and a pull and voila it came away. Unfortunately I hadn't figured on the motor's pin which protrudes into the turnout tiebar being stuck; this caused the whole mechanism to explode into its constituent parts thereby rendering the pair of points knackered. Bugger. 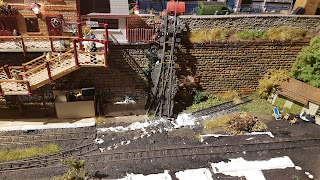 There was nothing for it but to go indoors and sulk. After I got over that idea and went back out to the garage I knew I had to replace the points. Fortunately I had a spare pair that would fit however previously there was a right hand pair meaning that the headshunt turned towards the wall. Originally I had a vague idea about making an extension to make the exhibition layout into an oval. 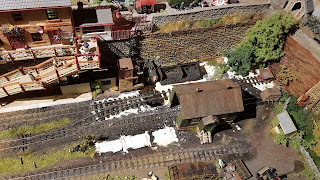 So, with no need to turn left anymore a left handed turnout makes more sense and gives a longer straight on headshunt. 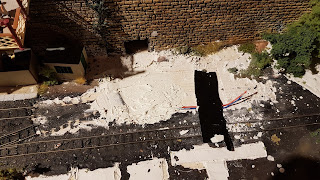 I decided that the replacement point motor would need to be mounted above the baseboard as I couldn't face buggering about making the hole in the baseboard bigger so it was in the right place. I had some 2 part epoxy wood filler left over from mending a window frame on the house so I filled the hole with that. It sets like stone but you can file and sand it. 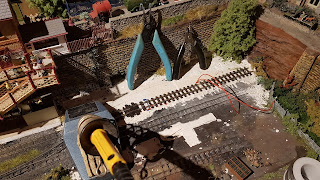 Having left it to set for a day it was a relatively simple job to install the points and the longer headshunt. I've taken the chance to add another isolating section so I can park a loco at the end of the line, maybe the station pilot? 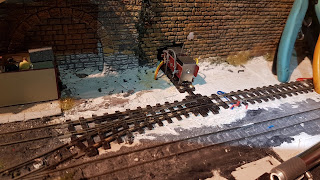 All done, wired in and working. Phew. 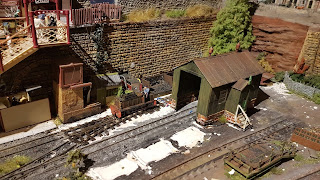 The first loco to test the new layout with buildings in place in a slightly reorganised arrangement. Some scenic repair to do now and a new switch to add to the control panel. 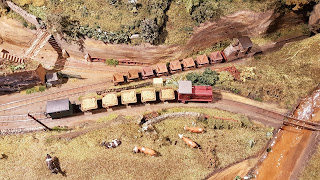 One thing about not being able to run trains into the terminus was that to play trains I could use the quarry sidings and the lighthouse siding. Nearly the whole layout works now.