Coaches and sand and locos

It's been a week or so of finishing things off, not like me really. I have a stack of things to finish still but being part furloughed again I should find the time. 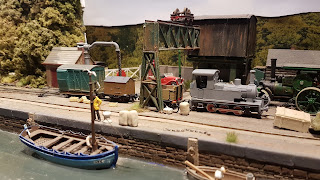 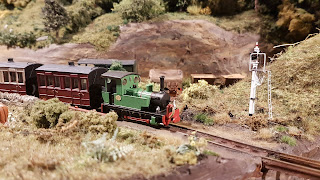 ...and in finished paintwork here. I'm rather pleased with this conversion but I'm not sure that it will live with me for long. I've got far too many locos already and more on their way, of which more later. 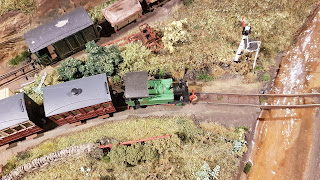 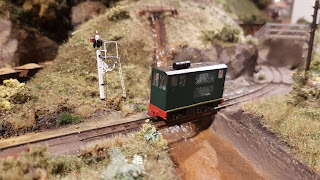 This is one I made to sell really. An A1 models box cab on a KATO 109 chassis. It has a rather charming lumpishness to it and you can see through the body grills to the gubbins inside. I used a Langley whitemetal casting of an engine and the radiator chopped off the end of the ROCO bash I did last month. 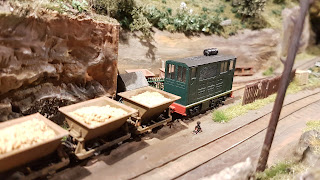 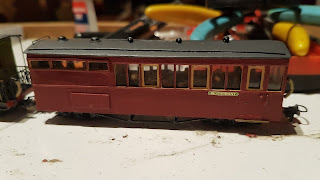 A small job done was to add the etched 'restaurant' signs which arrived from Narrow Planet. 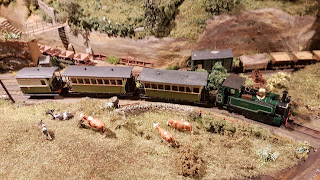 The main job finished off has been the painting and glazing of the new van and coach to finish off the tram set to go with 'Elizabeth' or 'Brigitte' the Minitrains tram loco. For once I've managed to make two of the same vehicles which look pretty much the same, so they go together rather well. 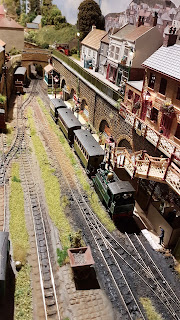 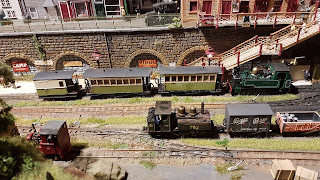 The van is a particular favourite, but as has been observed before, I do like a brake van. 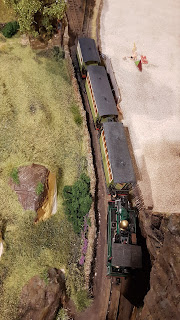 Here the tram set is passing the newly rebuilt and re-sanded beach area, it still has some work to do on it but the general look of it is much better. I really must sort out the back scene as it spoils the look of the whole new bit of layout. 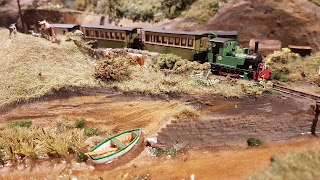 I spent quite a long time over the weekend and Monday making a video of  Underhill so that it could go on the 009 Societies YouTube channel. They are making a big push with social media and the web site so I was flattered to be asked to contribute. Turns out it is much harder to video a model than the real thing. Anyway if you have 12 minutes to waste, click on the link below to see mine but also a growing collection of other excellent layout videos.
The video on the 009 Society YouTube channel 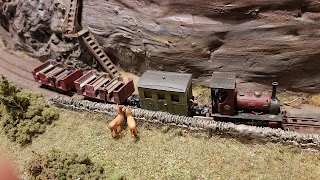 Daisy and the quarryman's train feature in the video, amongst other things. 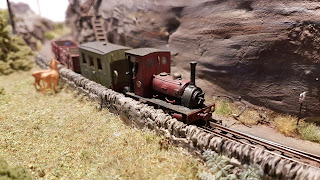 As I type I'm waiting for the postman to deliver one of the new Bachmann n gauge Percys. It remains to be seen if it is any use for anything 009 but a small, well made 0-4-0 chassis can't be bad news; except for the wallet. Watch this space for my further thoughts in the next thrilling episode.