I've been quite pre occupied with other things such as work, real life and clearing out all the music making equipment which the garage shared with the Isle of Stoner Railway, so actual layout progress has been rather limited. Planning and preparation for the last big push, completing the line back to the other terminus at Port Lucy, has been extensive. 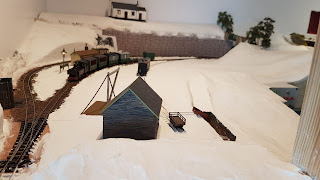 I did clear out all the loose ballast and plaster and have a bit of a test/play and for the most part it worked as I'd hoped. 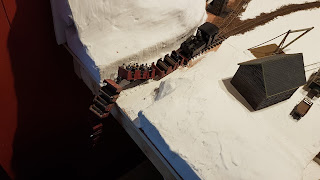 However, in a near disastrous shunting manoeuvre I stopped the loco in the nick of time with the rake of PQR carriage pointing very much down hill. It has been suggested than a buffer stop might be a good investment but I'm just going to build some more layout instead. 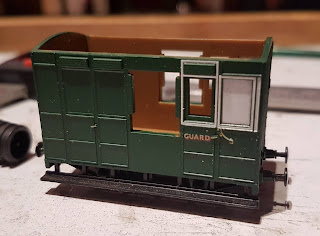 I was looking at the couple of repainted and detailed PECO GVT coaches that I have and decided that what they needed was a brake van. I'm not mad keen on the matching van as it comes but have previously modified a red one which looks much nicer. (To my mind) It's a relatively simple conversion which is fundamentally blocking up the single window with styrene sheet. It makes more sense in terms of the way a van like this would be used. 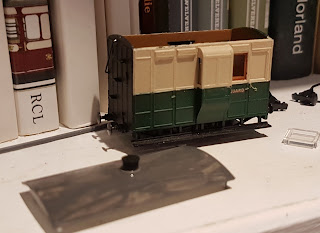 Once that is done I removed the moulded hand rail and replaced it with brass rod and added the roof grab handle in similar vein to the coaches. Then it was repaint the ends black and the top half of the body in cream. All the unpainted PECO roofs look better for some grey paint, no steam hauled railway had roofs which stayed white for long. 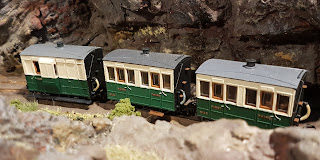 With the addition of vac pies, job done. Probably need another coach now to fill out the set... 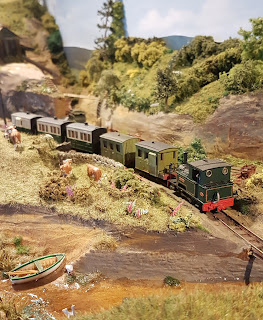 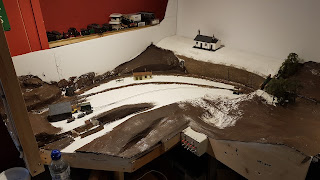 Meanwhile, back at Upper Bay with some testing I realised that my concern that the new wall was too close to the running line was right so some demolition and reconstruction was needed to move the wall back. I didn't take any pictures of the work as I was too cross with myself. It all results from fitting a third siding in and therefore not leaving enough room for the wall. I had to cut away a large part of the supporting foam core behind the scenic wall and even with that moved out of the way it's very tight and the wall has a slightly concave lean where it comes close to the track. This may all lead to a complete rebuild at some stage but it would involve too much work for now. 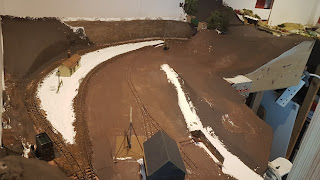 Before and after the wall surgery I have finally started to add colour, brown so far. Very much just a base coat for other colours and textures. 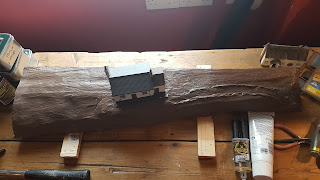 I painted the removeable section... removed.
The next section of railway is relatively simple and I think I've got all the bits of wood and track I need to get going on this. I'm on holiday for a couple of weeks now up in Scotland so the only modelling will be virtual but I hope to crack on with it as soon as I get back.
The line leaves Upper Bay towards Port Lucy over a bridge over a minor road and then there is a section of road side tramway (to justify all the trams and tram locos I've acquired over the years). This will be a straight forward for a couple of feet and then it all gets very complicated. Port Lucy is not only the junction station where it meets the 'mainline'; it is also a port and has the loco sheds, carriage sheds and so on. I'm looking forward to having both ends of the line and a passing loop but there will be an awful lot of work to do to get that far. Tom Dauben has offered to do the water in the harbour which is great so that only leaves the rest of the layout to build.