Since my last post I've made some progress in the garage despite the arctic weather and numb fingers. So apart from adding some basic scenery using mostly foamcore and hot glue gun. 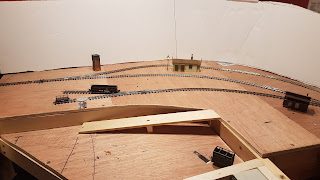 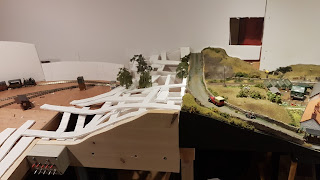 The cutting which hides the points to the hidden siding is working well and one trees and greenery are added properly I'm sure it will be fine. 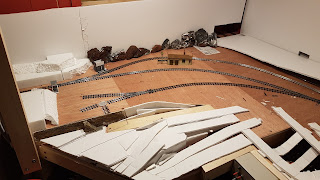 The other end of the station is also taking shape. The hidden sidings will be hidden under a lift off scenic section which can be seen lolling on the track. I'm still working out how to achieve this in practical terms but the ideas are swirling. 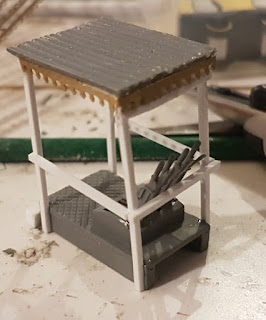 Meanwhile in the slightly warmer sofa area of the living room lap tray I worked on the buildings for Upper Bay. First new build was a pair of ornamental lever frame shelters; one for each end of the station. Lever frames are Wills of course. 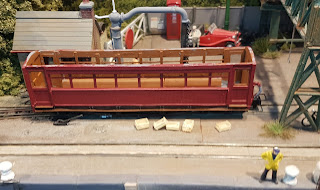 I've struggled with the Ashover carriage bash, Not sure I like the result particularly but maybe it will grow on me. Here it is without roof and with painting underway. 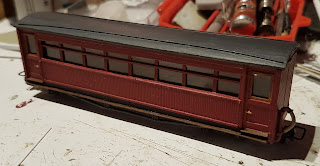 Here it is mostly finished. I think what I've created is either something from Japan or the IoSR's very own FR Barn. Anyway it's finished and once the garage is warmer I'll try it out with some of the other carriages in the fleet. 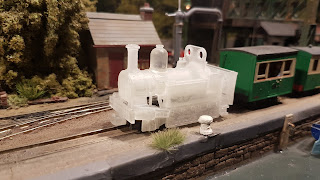 The next of Dave Malton's minis arrived, this one being a shrunk IoM Beyer Peacock type of thing. I'm calling it 'Cat' as it's a Manx cat which is after all, a foreshortened moggy. It is again a fantastic bit of design work and comes with three types of cab, having seen the cab fittings nicely printed I decided on the full open version. 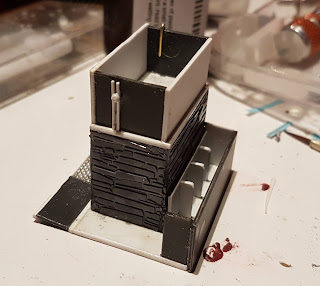 Next on the laptray of joy was the water tower. It is based loosely on the original Tan y Bwlch one complete with urinals behind the stonework. The stonework is the most notable thing really as it is made from the new Wills slate walling sheet, again designed by Dave Malton at PECO. It is just the thing. The tank will be a slate slab build so rather Welsh considering it's on the Isle of Stoner. 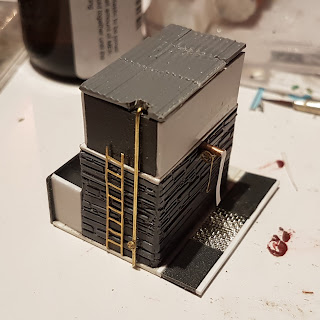 I contemplated having a corrugated iron lid on it for a while but in the end I've plumped for open. 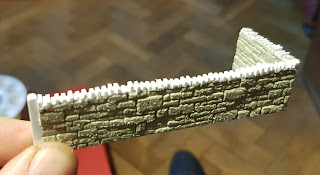 Another TyB feature is the coal drop onto the approach road. Before the preservation era this was a very un photographed are and the only known image of it is a still from the film 'The phantom light' which was partly shot at TyB and on the FR. The coal drops dropped into a little walled yard and so so will mine. This is the wall which is Wills sheet with individually cut styrene stones on the top. A long and annoying evening but as it's right at the front of the layout it needs to be detailed. 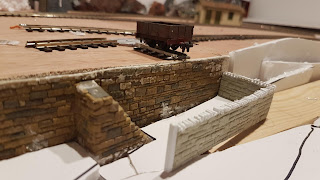 This is it in place, there will be a yard door too. The wall and stairs are pre made ones that I rescued from a previous layout, they happen to be exactly the right size for the location so who am I to argue. 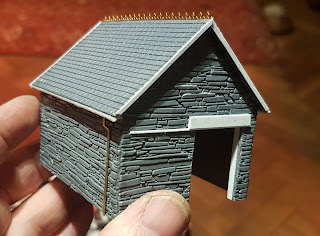 Next building is the tiny goods shed. It was small in reality at TyB, being part of the current café. (When open again a purveyor of excellent cake, by the way.) This is the first proper building I've made with the new Wills sheet as mentioned above and I think it works very well. I have to make and fit the sliding door but otherwise job done. 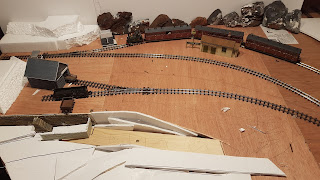 Here they all are in situ. The only remaining structure to construct is the crane. 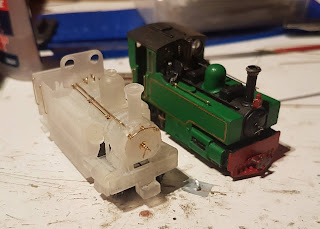 When I was adding details to 'Oy' the mini Manning Wardle I only had one RT brass coupler so I put it at the back but by the good offices of Rob, Mr RT Models I now have one for the front. Just waiting for the plates to arrive and it will be done. A nice, useful loco. 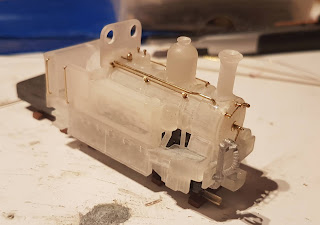 Here is 'Cat' with all the additional pipework and handrails on. Some liquid gravity and paint and Bob is your fathers brother. 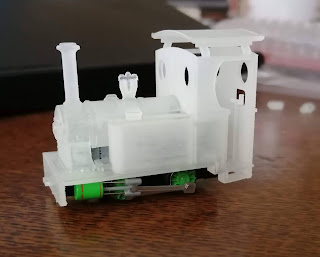 This little beauty is a custom designed loco by Dave Malton sitting on my new Percy chassis. Can't wait to get my mits on it. It is based on an Avonside loco and will be called 'Grace' after my daughter.