It has been a week of finishing off bits and bobs and testing the layout... it all works quite well but I have found a couple of things on the new bit which might benefit from tweaking before it is too late. 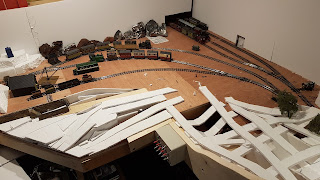 This is the state of play at Upper Beach. All the buildings are finished and painted so no more room for  procrastination there. I still have to work out how to make the hidden sidings lid so that it is easily removed but not obvious. I have a few ideas rumbling round the little grey cells but nothing close enough to write down or start work on. I think the first job needs to be ballasting the track, most of the layout has just filler up to sleeper level but I want to make it look as though the preservationists have had a go a clearing up the track in the station area. This means I will have to actually do some grown up ballasting, a job I dislike and hence am not good at... 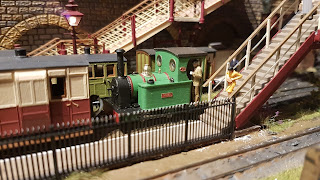 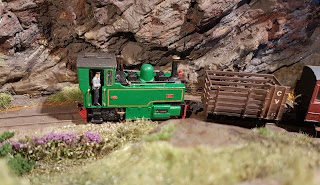 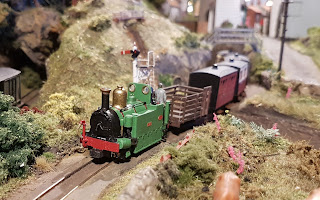 'Cat'
The name plates for all three of my Dave Malton locos arrived and have added the needed splash of red on the tanks of all of them. I've also added crew from Modelu to 'Grace' and 'Cat', they are excellent little chaps and most characterful. 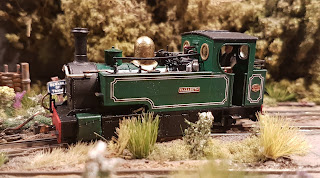 'Elizabeth' has also had the benefit of crew from Modelu. I've also done a few other jobs on this lovely loco from Fourdees. Most obvious is the removal of the big electric lamps and the repainting of the name and works plates into IoSR standard red. The dome has had a a coat of gold pen which has added a bit more shine. I may add some real coal to the bunker and maybe I'll pluck up the courage to remove the turbo generator from the boiler top as strictly speaking it serves no purpose; I don't want to make an unsightly hole in the boiler though. Other than that I really like this loco now. 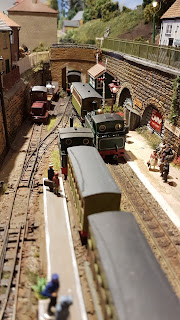 Here 'Elizabeth' is just arriving at Underhill while 'Olwen' waits to depart. 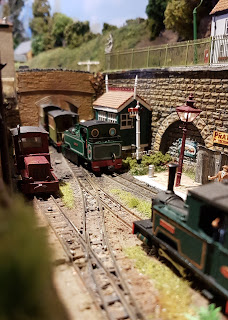 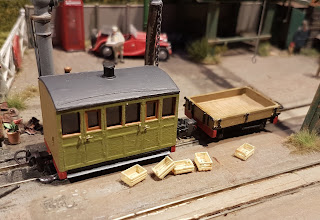 Here is the new little coach and wagon that I made from bits and bobs donated by Stan Williams. Most gratefully received, so far one coach and two wagons have emerged from the bag. There are at least a couple more coaches to come too. 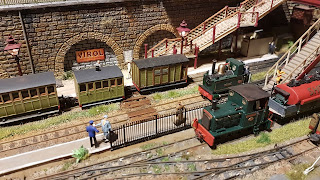 The new coach has joined the TR based rake as it is a shortened and lowered TR coach. Also in this picture is the heavily modified ROCO/Farish bash, 'Granville'. The chassis was second hand and as is the way with lots of these 03/04/08 chassis it didn't run very well, mainly because of the pickups so it has had a visit to the laptray and had the problems resolved. It is much better as a result, I think only one set of pickups was making reliable contact previously. It still has a bit of a limp so I think the quartering may need attention too but it is reliably usable now.

I built a new layout too. Well I glued some track to a bit of wood as a test track which fits in my tool box. 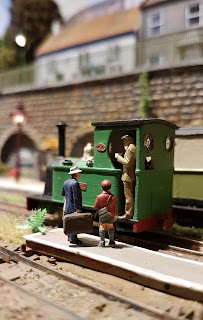 Ray stands on the footplate and chats with visiting father and son about the railway. Always glad to promote the line and always happy to have a cup of tea too.