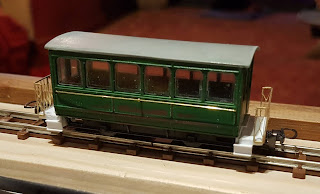 At the end of last weeks thrilling episode I left a cliff hanger - what would become of the left over bits of the Lilliput coach? Well, breathe again. Those terribly nice chaps at Light fantastic stores despatched the balcony etches in super fast time and so now the funny little tram saloon is reborn. 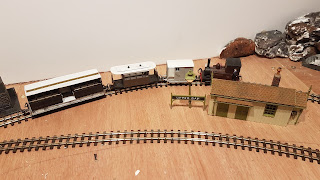 The other little train I've been working on doesn't look like it has changed but in fact both the van and the bogie coach have had modification to their running gear. The van as designed has large holes in the whitemetal castings that the pinpoint axles run in, in actual fact they just fitted too well and so hardly turned, it was as if the guard had forgotten to take the brake off. A simple fix was to drill out the castings and fit a set of brass bearings. Job done.
The problem with the coach turned out to be that one of the bogies didn't rotate freely enough on its pivot which was easily fixed by a little fettling with a file. The whole set now rolls nicely and goes round all the curves without any problems. Some paint is the next job and then some lining. I ordered a 3D print of Brazil style loco which is quite nice but actually is far too big as it is designed for a KATO 109 chassis so I'll probably just sell it on. 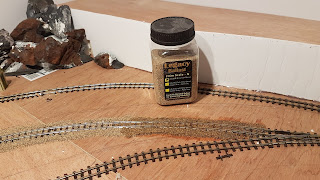 I grasped the nettle and started ballasting on the new bit, I had a jar of ballast I bought for my stalled n gauge layout so it seemed sensible to use that. I ladled the dry ballast on and then wetted it with the traditional water with a drop of detergent in it, then I soaked it in dilute PVA. 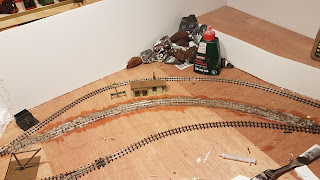 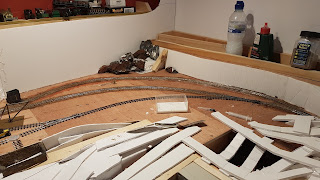 Fortunately the glue set nicely and left the track nice and solid so I did the other side of the loop. I've avoided the points for now but will have to bite the bullet eventually. The goods siding will be done with my usual filler method. 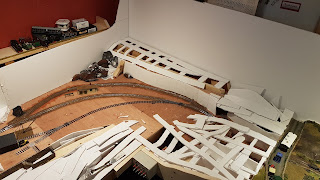 The removable section has gained a set of contours which are foam core stuck to off cuts of timber. I need to work out a way of attaching a handle to remove it easily. Plan A is to have a door handle hidden under a removeable building, I have a farmhouse which will be just the job. 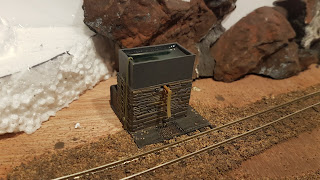 I've sprayed the ballasted track with Railmatch frame dirt paint which will make a good starting point for track colour. The water tower is now glued down and I mixed up some resin water for it. In the picture it is just poured in and looks good. Hopefully it will still look as good when it sets. 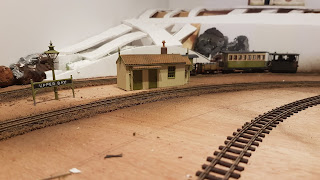 The landscape is gradually taking shape and is starting to look quite promising in photos. 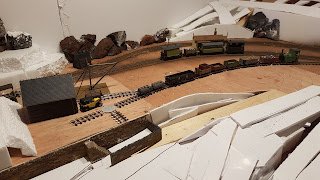 All the scenery now has its bare bones, so it's plaster bandage time next. Getting there.