A bridge, a cottage and some coaches

Once again work and appalling weather have kept me away from the garage but I have been quite busy on the trusty laptray. First thing to show you is the footbridge made from the kit from Fair Price Models. It went together very well and after a squirt of brown primer I started painting it and it looked good. 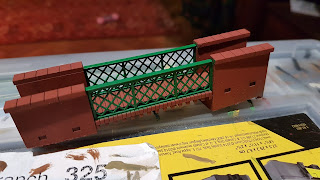 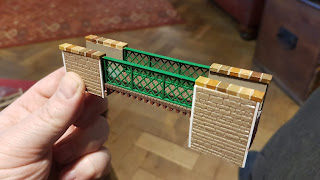 After some more painting of the coping stones I added some Wills embossed sheet to the outside of the bridge supports. 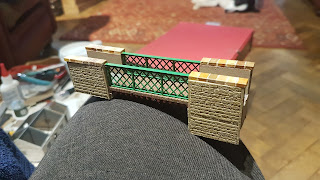 Final paint, might need a light wash with something dark to pick out the stone courses. 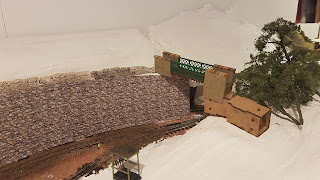 Here it is plonked more or less where it will end up. The wall has some textured printed rock paper on it. I'm not overly convinced by it but maybe some paint and greenery will eventually make it ok. The next stage is to glue the bridge in place and make up the ground with filler etc so that it looks deliberate, rather than the after thought that it was. 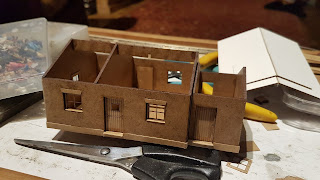 This is the bare shell of the cottage basically made as intended except I left out one of the internal walls and made a hole in the base so that it would fit over the lifting section handle. 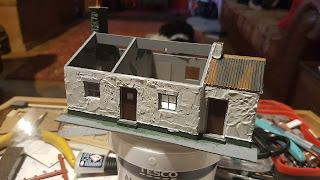 The cottage, which will be the station Masters cottage at Upper Bay got a coating of Tesco's cheapest filler. I applied it with a craft knife and I'm very happy with the result. 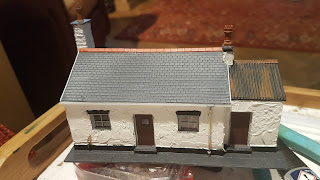 Next came Wills sheet roof and guttering from Modelu which is superb and really looks good. The down pipe is brass pipe with 3D printed fittings. Up close it looks great which I'm not sure these phone pictures do justice to. 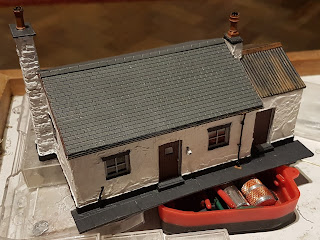 Here it is all painted up and pretty much finished. I've fitted an LED tail light by the front door which hopefully will work once a battery box arrives. 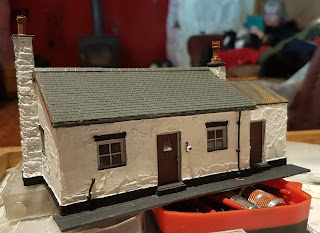 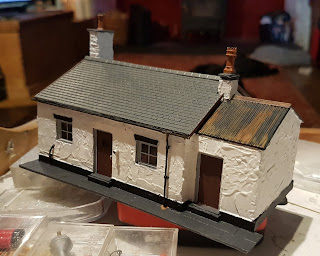 The other thing I've been working on is my train of Corrisalike vehicles. The bogie coach is nearly done but the roof is still lose as I want to add a few figures.

The van and the 4 wheel coach are pretty much finished, the roof on the 4 wheeler isn't all that brilliant and may get a remake at some stage.