After all the frantic work of the previous few weeks things have slowed down considerably in the garage. I've been enjoying adding scenery elements and playing trains. 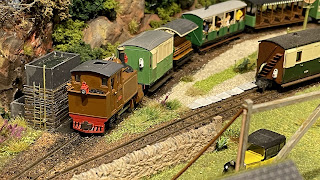 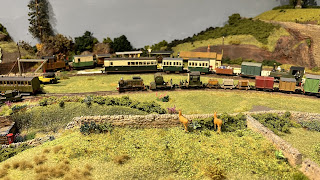 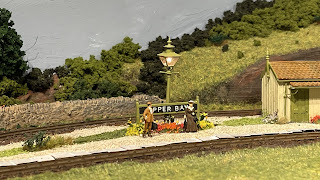 A few people have appeared on the station but only three, it's an out of the way place so I'm trying to resist the temptation to over do it. 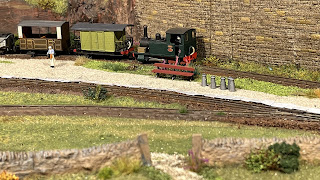 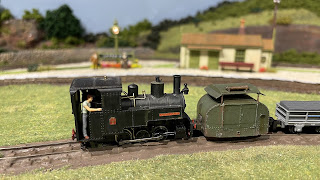 I've also had some time to devote to rolling stock and locos. The Minitrains Decauville has always been a hesitant runner which I'd always assumed was a pickup problem so I took the chassis to part and cleaned and bent the pickups out a bit. Putting it back together again was quite a challenge but after several false starts a much improved runner has joined the fleet.
The armoured Simplex has a dodgy chassis but I thought some weathering and the number plates I bought a while ago have made it look much better. Still runs like a chicken though, another day. 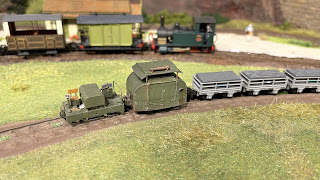 I don't have much luck with Simplexes as the little one which looks really nice and has a Portram chassis under it doesn't work either... well, the wheels on one side don't go round. 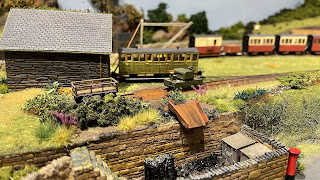 It works as a scenic item though. 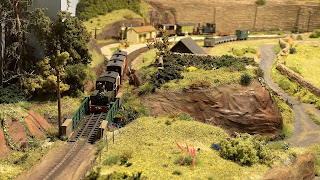 I've added telegraph poles and started to make some fences. I've used brass rod as fence posts and painted them to look like weathered wood. My plan is to use fuse wire as fence wire, or maybe cotton thread. 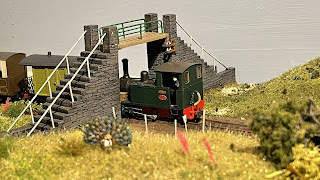 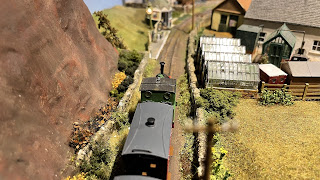 The new rock cutting has blended in nicely with the addition of some foliage. 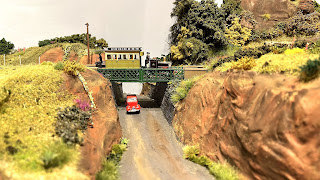 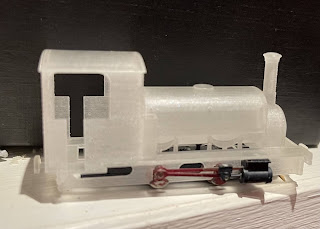 Paul Towers has kindly given me a 3D print of Manning Wardle 'Jubilee 1897'. It was a Penrhyn Quarry Railway loco so I'm going to have a go at finishing in PQR lined black. However there is a way to go yet before I worry about paint. It is designed to run on a Minitrains F&C chassis, the only one I have has no working motor, fingers crossed one is on its way. The only thing which bothers me about the loco is that the cylinders are far too far back so I may have to try and extend or replace the piston rods and move the cylinders to the right place. We'll see.