﻿
Most of what I've done this week has been un-remarkable but the scenery on the new layout, probably just called 'Castell Coed', has made a bit of progress. I've stuck down some crushed slate in the hope that it will look like the very bottom of a waste tip. Not bad I think, some greenery and some fencing and it won't be too bad. 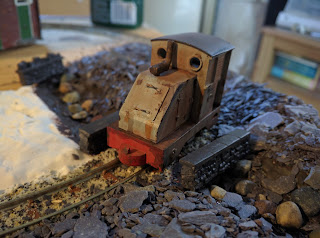 The works plates arrived for Sphinx too 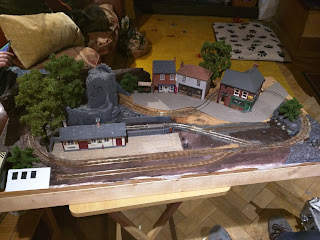 In other scenic matters, I've had the paints out and started to cover the plaster with some basic earth colours. Also painted on is the first coat of track weathering, despite the evidence of the photo above it does look better. Some nice ready made trees arrived which you can see plonked on the layout, I wanted the trees to have some real life bulk to them. When you see trees by a railway and houses they often tower above them so a few biggies will help disguise the tiny size of the layout... or possibly dwarf it.
A while ago I ordered a print of a four wheel coach by Tom Bell from Shapeways but they cocked up the print which left the exterior detailing off but otherwise the coach was a nice size to fit with my other stock. I contacted Shapeways to get it done again which they agreed to do without any quibbling. Eventually a second attempt turned up exactly the same as the first one so I have asked for my money back. I was a bit cheesed off as they look like a nice design﻿ in the CAD, I was looking at the erroneous print when it occurred to me that I might be able to create something like the intended panelling by sticking styrene strips on. So I have, rather fiddly but I think the results are ok. I've added styrene seats inside which add quite a bit of rigidity to the coach and it now awaits some primer which will give a better idea of whether it will look ok. 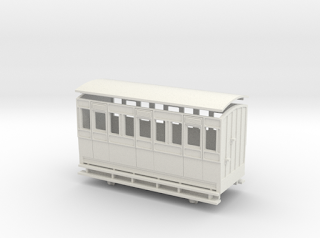 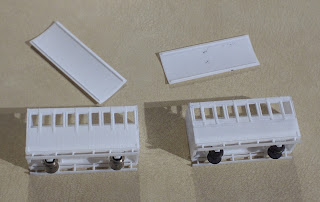 As printed on the left, with my additions on the right 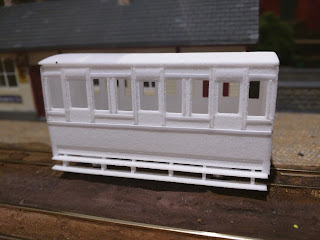 The amended one before the seats went in 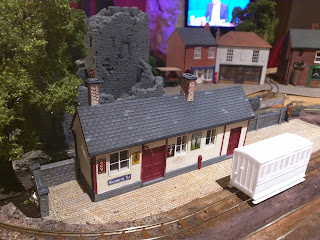 In other news the Busch HOf Decauville type 3 loco has arrived and is unspeakably tiny and cute. I suspect that the next project may well turn out to be an HOf micro layout...

Here it is in the company of some other not huge locos and a slate wagon
I finished off the new Parkside Dundas van bash too and I'm still not any fonder of it so it will go in the after Xmas bankruptcy sale and hopefully raise a couple of quid to keep the wolf from the door. I have a Manning Wardle to pay for in February... gulp. 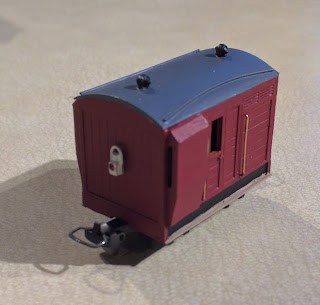 This weekend was mainly devoted to finishing off the coaches for the little layout, sorting out and repainting some wagons and constructing a brake van.﻿ 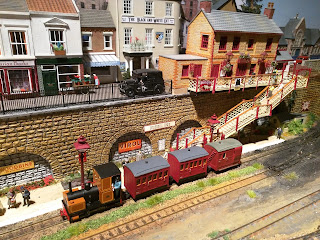 Here are the coaches and Sally at Underhill Town
The new coaches, their brake van and a couple of older four wheelers now all have brass grab handles, they add a little bit of three dimensionality. 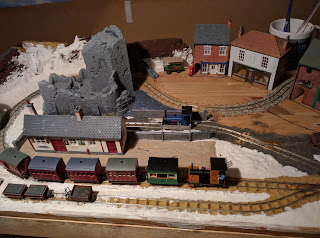 The Ferro Train skips got a load of loco ash to weigh them down a little which should help them roll better, they look the part too.

I did a small amount of scenic work, which consisted of starting work on the stream area. I collected some small stones from the beach at Trefor which has a good variety of granite and slatey stones on it. Having dried them thoroughly and painted the stream bed a mixture of dark brown and gungey green I have carefully arranged the stones to look like rocks. 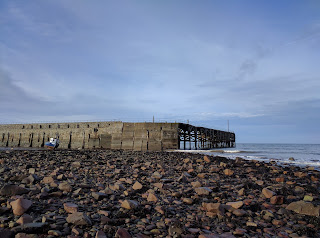 The beach and pier at Trefor 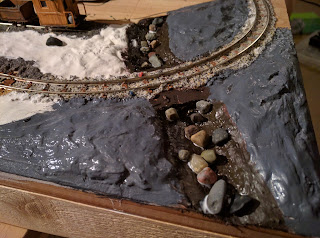 Some of the beach now in my stream
While I was looking for something else I found a couple of badly finished and abandoned TR gunpowder wagons and a PD freelance brake van kit so I've renovated and repainted the wagons and spent a pleasant hour or two bashing the brake van into being. 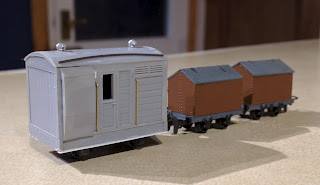 I had a rummage and found a pair of VoR brake van duckets so I trimmed them to size and stuck them on, I do like my guards to have a view fore and aft. Running boards from styrene, brass handrails and a couple of torpedo vents and styrene rainstrips on the roof finished it off. I'm not sure I like it very much but I'll finish it off and see how it sits with the rest of the fleet. 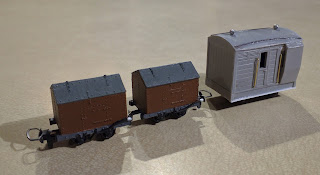 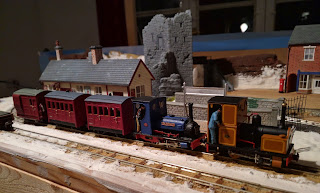 ﻿
I haven't done anything to the new little layout but I have been attending to some rolling stock for it. I had a look in the great drawer of un-built kits﻿ and found a couple of little Parkside Dundas 4 wheelers which are ideal so I have built the and painted them, they go nicely with the brake van I bodged some years ago. They still need a spot more paint and maybe some brass wire grab handles to finish them off. Sally the Bagnall now has a crew too. 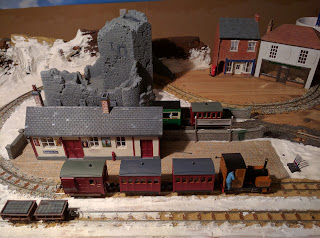 Sally and her train 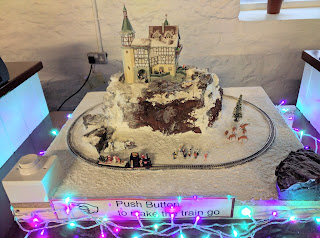 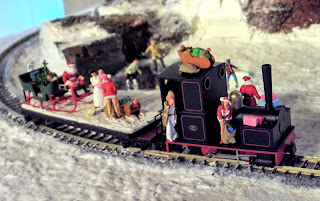 I finished off the Christmas layout and installed it at Dinas in the goods shed where this year's Santa trains on the Welsh Highland will run from. Hopefully it will behave itself and not get too fiddled with by kids/staff.

Over the last couple of evenings I have given the nice clean, pale blue Ferro Trains wagons a good coating of filth so they now look a whole lot more convincing. They don't run very well as they are so light so I will add some loads to give a little weight.

I used acrylic paints and some weathering powder and am very pleased with the result. First colour was a dark brown then a very watered down orange. Axle boxes were picked out in black to represent the oily gunge that this sort of wagon accumulates and then finally once that was dry I added some dark grey to give some highlights. While the grey was still damp I brushed all over with my patent mixture of rusty filth weathering powders. It isn't what you would call subtle but this sort of unloved utility vehicle is generally seen in a grotty state on a working railway.

Now the Christmas layout is out of the way I will be able to crack on with the roundy roundy and hopefully come up with a decent name for it, something to do with castles I think.

The other project which presents itself is a Narrow Planet 'Barclayfication'  kit for the Minitrains Boehler loco which just arrived in the post. It will make an interesting counterpart for my own rebuilt Boehler. I will try to finish some other things first...
No comments:

A bridge over troubled plywood

Not got much done on the layout this weekend﻿ but I now have a stream bed and a small bridge over it, it then vanishes under the road in a culvert. 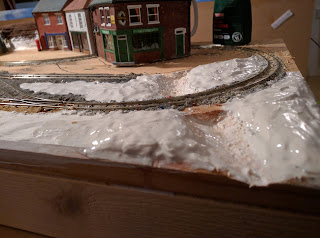 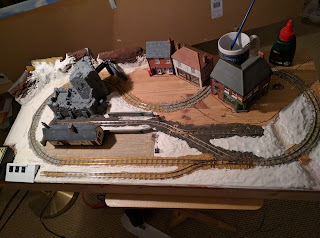 As it is at the moment
I've added a few bibs and bobs to the new﻿ Bagnall and added a crew. These are Bachmann people and are definitely 4mm scale rather than the usual Preiser 3.5mm ones I use. This loco will mainly be used on the new layout and I'm going to use proper 4mm scale people throughout. I have quite a selection of unpainted whitemetal figures so this is a good excuse to paint some. I may change my mind if they don't come out OK. 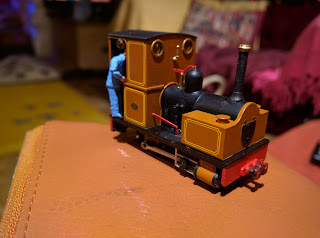 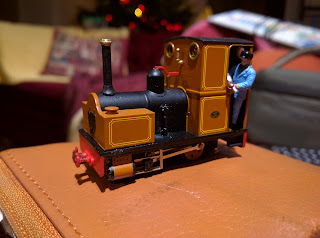 I've also wired up the Xmas scene layout and sorted out the rolling stock for it. Pictures once it's finished. Has to be installed on Thursday so a little more work to do on it but nearly there.
No comments: